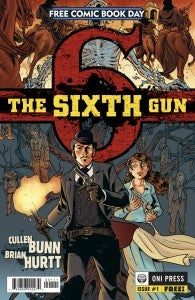 NBC may not have a great history with comic book and superhero properties in the recent past, having killed David E. Kelley's Wonder Woman pilot and not having been given the opportunity to try again with Amazon, which went to The CW--but tonight the network ordered a pilot based on Cullen Bunn and Brian Hurtt's The Sixth Gun. Set during the darkest days of the Civil War, wicked cutthroats came into possession of six pistols of otherworldly power. In time the Sixth Gun, the most dangerous of the weapons, vanished. When the gun surfaces in the hands of an innocent girl, dark forces reawaken. Vile men thought long dead set their sights on retrieving the gun and killing the girl. Only Drake Sinclair, a gunfighter with a shadowy past, stands in their way. The project was originally set up as a miniseries at Syfy but the cable network let it languish too long and eventually Lost producer Carlton Cuse came along to rescue it and bring it to NBC. NBC and Syfy are both part of the broader NBC-Universal family, although obviously NBC is a much bigger stage. "There's a lot of excitement over it! I'm really thrilled with what they have planned," series writer and co-creator Bunn told ComicBook.com in an interview earlier this month. The writer has entered the mainstream comics scene in a big way and is currently writing Venom and The Fearless Defenders for Marvel Comics. According to The Hollywood Reporter, Ryan Condal will pen the script with Cuse set to serve as executive producer and showrunner on the drama. This is Cuse's second pilot to be ordered this season following Bates Motel, a reimagining of Psycho. Eric Gitter and Andy Borne will also serve as executive producers on The Sixth Gun.

The Sixth Gun Gets Pilot Order at NBC

The Witcher 4 Hinted at by CD Projekt Red

These 5 Netflix Originals Continue to Dominate Every Other Streamer

The Elder Scrolls 6 Tease Is Painful for PS5 Players