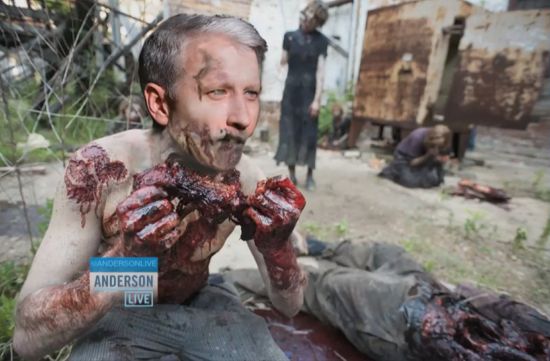 Norman Reedus, who plays Daryl on the Walking Dead, paid a visit to Anderson Live on Friday. Norman brought his crossbow to show it to Anderson Cooper, and Anderson relayed a story about how his mother got him a crossbow when he was a kid, but she took it away when she realized it was a high powered weapon. Also, Anderson Cooper’s staff created an image of him as a zombie, as seen in the photo above.

In an unusual segment, Norman Reedus pretended to be a zombie, and Anderson Cooper fired at him with a crossbow. Don’t worry, Anderson wasn’t using real arrows, but instead he loaded up the crossbow with some type of Nerf arrow. Of course, Norman wouldn’t have had much to worry about if he was a zombie, because Anderson’s first show went low striking Norman in the crotch, and Anderson’s second shot sailed over Norman’s head. The final third shot came closer, but it looked to him Norman in the mouth, rather than the needed brain shot for a zombie kill.

Anderson’s mother probably should have let him keep the crossbow as a child, because he’ll likely be in trouble if there is ever a true zombie apocalypse. The Walking Dead airs on Sundays at 9 PM ET on AMC.