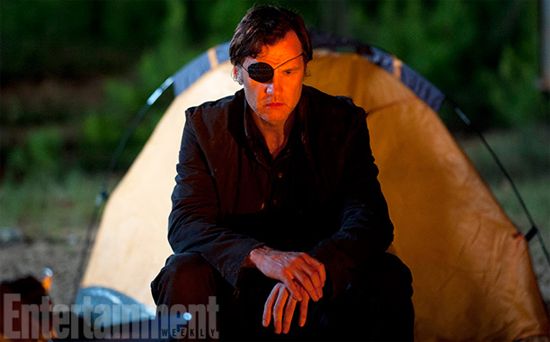 In one of the odder bits of conversation that has happened on AMC's Talking Dead aftershow for The Walking Dead, guests David Morrissey and Ike Barinholtz seemed to agree that it would be a perfectly plausible story development for The Governor to attempt to join Rick's group at the prison.

Of course, how the residents of Woodbury, whose husbands and sons The Governor killed, would feel about that is a whole other issue--but Barinholtz speculated that in fact the events of tonight's episode could lead to The Governor seeking asylum from Rick Grimes, and Morrissey, who plays The Governor, suggested that it would be the kind of unlikely alliance that happens from time to time.

"I think that is what's going to happen--I think he's going to go and be like, 'Hey Rick, I need your help, I need to keep these three ladies safe,'" Barinholtz said (before launching into a pretty serviceable impression of Andrew Lincoln's Rick). "My prediction is they will join forces." 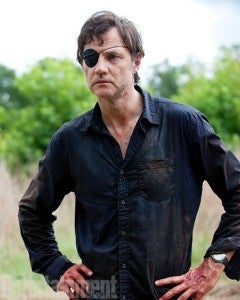 Host Chris Hardwick suggested that such strange bedfellows wouldn't be out of place in the world of the series, and Morrissey not only agreed, but took it one step further. "I think in the real world, there's also--we see really unlikely alliances all the time and I think that we can reflect that in the show as well," the actor said.

He had previously said that, charged with the safety of these three young women, he felt that his character was no longer particularly concerned about Rick, Michonne and the group at the prison.

Of course, even if all of that is true--what are the odds it could work out? It doesn't seem likely. Besides the widows and orphans of Woodbury, you've got:

Having just kicked Carol out for killing a couple of people, it seems impossible that Rick could see his way clear to inviting The Governor in, whatever his situation. After all, not only is The Governor...well, The Governor, but at least when Carol committed her crime, she believed she was doing the right thing. The Governor--well, not so much.

She just finally got over her hangup on killing the man. It doesn't seem like the kind of relationship where she'd just live and let live. More likely, The Governor coming with an olive branch would be seen by Michonne as an opportunity to cut bits of him off like she did in the comic books.

He and his people beat Glenn nearly to death and then sexually humiliated and assaulted Maggie. It doesn't seem likely they'd feel comfortable with him sleeping in the next cellblock over.

The Governor mutilated and then killed Merle, leaving him to turn so that Daryl had to deal with him. Any part of that sentence would be likely to earn him a death sentence from the prison's A-#1 badass.

This new, more brutal Carol is still out there--as Morrissey himself acknowledged on Talking Dead--and it's hard to imagine she'd let The Governor walk away, given a chance. She knows that he's a threat, and she's got to do something to avenge her pookie.

It was also interesting that during  much of the discussion about this potential plot point, the camera stayed resolutely in a tight shot on Barinholtz, so that there was nothing in Morrissey's expression that viewers could use to gauge the likelihood of the events.

The Walking Dead: Could The Governor Join Rick's Group?