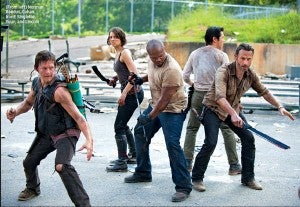 AMC's The Walking Dead panel is happening right now at Comic-Con International, and before any real news comes out of the creative types present, here's a sneak peek of some of what to expect from the show's upcoming third season, which debuts on AMC in October.

This is the year that some pretty major things get moving, with fans of the TV series getting to know Michonne, Woodbury and its leader The Governor for the first time. We also get our first look at the prison (seen at right) where comic book readers will know that the characters spent a long stretch of time--one that didn't end particularly well.

Robert Kirkman, the creator of The Walking Dead, joined us to talk about the show's upcoming third season and what fans can expect from the smash-hit AMC series.

Can you tell us about building not only the prison, but Woodbury as well? It seems like you guys have had to really work your set designers to the bone this year.

Woodbury is a huge undertaking but I think when you see how we use it in the show and the way that the two storylines tie together in a really cool way, that fans will really appreciate what we did with it.

Obviously one of the highlights of the season two finale was the introduction of Michonne and the very cool way that was done. Can you tell us anything about how Michonne and Andrea might come back together with the rest of the group this season?

I can't say anything about that, man, what are you thinking? [Laughs]

No, we'll definitely be seeing those characters and they're a big part of the story, but where they are and what they're doing in the story, I can't get into.

A while back, [Executive Producer] Glenn Mazzara told a reporter that he wanted to make sure people didn't get comfortable at the prison and feel like it was a place the characters could be safe. That seems like it's almost a direct response to some of the harsher criticisms about that part of the comics' history. Would you say that's fair, especially after all that "too slow" complaints in season two?

No, not really. I think when you're doing your job as a storyteller, you're really only working for yourself and playing to expectations and worrying if what you've done will sell...that is only going to make your story feel artificial, and that's not what we do.

I think what Glenn Mazzara was talking about was just making sure that the prison doesn't look cozy--that it's moody and creepy and not a comfortable place for them to live in--becuase this is not a comfortable show.

A while back you and I talked about how, over time, you'd like to see a full year of The Walking Dead comics go by without there ever actually needing to be a zombie on the page. Is that something you think you could get away with on the show, just examining the world and the people and ignoring the walkers completely?

I don't know that we'll ever go through a season of The Walking Dead without seeing any zombies, and I don't know if we'll ever get through a whole year in the comics without it either. But the goal is to make the characters you're writing, and the situations, compelling enough that the zombies aren't necessary.

Was it hard to resist throwing Michonne in earlier? I mean, obviously until the show was on the air and was already a success there was really no way of knowing you'd even have a season three. Fans of the comics were clamoring for her from day one.

There was not a rush to get Michonne in; we wanted to go out on a bang with the [second season] finale, and it was Glenn Mazzara who came in and said, "We should tease Michonne with the finale," which I thought worked great.

We definitely held out on that character and didn't rush her into the show for a reason. I think when you see what we're going to do with her, you'll agree that she was brought into the story at just the right time.

It is somewhat strange that it took us until season three to get to her but that's kind of a cool thing. The show has been so interesting and so popular thus far, it's really interesting to me to think that season three is where we really get to the good stuff with the Governor and Michonne and everything--that this far in, going into season three and having so much more good stuff to go that people don't know anything about if they're just watching the show and haven't read the comic.