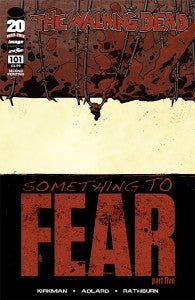 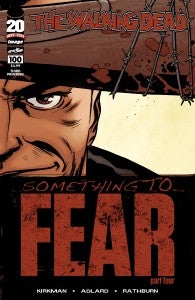 #100, the best-selling, single-issue comic book since 1997 according to Diamond Comics Distributors, has sold through its second printing and will be headed back to press for a third, along with a second print of this month's #101, which follows the survivors' reactions to the traumatic events of #100, according to Image Comics.

As seen at right, the two covers will connect to form a gruesome image of the series' villain, Negan, and his baseball bat "Lucille," spattered with the blood and brain matter of a fan-favorite character.

No specific release date is yet set for the release of the 100th issue's third print, which would be (I believe) the 17th cover that the issue has featured. The second printing of #101 will be available on September 12. Both issues are currently available on ComiXology if your store is sold out.

The Walking Dead Heading Back to Press on #100, 101 With Yet More Covers