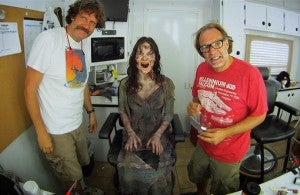 A new feature at Entertainment Weekly's website provides fans of The Walking Dead with a cool, ninety-second time-lapse video that shows off the makeup effects of Greg Nicotero's crack Walking Dead effects team over at AMC.

In less than two minutes, their subject is transformed to a grotesque ghoul ready to be brought down by Michonne and Rick's crew, and it's pretty cool to watch.

It isn't, however, completely unique. While the new video is exclusive to EW (as a tie into their Walking Dead covers next week), a similar and just as official video can be found on YouTube. It's five minutes long rather than two, and it focuses on the pilot's "bicycle girl," whose pre-zombie life was actually the subject of a series of web shorts on the AMC site. You can check out her transformation in time-lapse below.

The Walking Dead returns to TV on October 14.

The Walking Dead: How To Make a Zombie in Two Minutes or Less