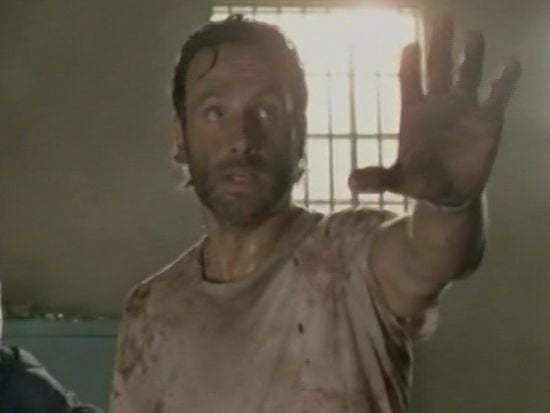 4. Does Andrea hold a grudge against Rick’s group? – After Andrea draws Merle a map of where the farmhouse was, he asks if she wants to come along to look for her old group. Andrea doesn’t seem to be interested in finding them again. Merle says, “We got something in common, Blondie, we got left behind by the same people, and saved by another.”

3. Does The Governor have a zombie daughter? – While having drinks with Andrea, The Governor mentions that his wife died in a car accident eighteen months before everything happened. He also adds that it’s just him and his daughter. Could The Governor’s daughter be a zombie like in the comic books?

1. Did Carl really shoot his mom? – Perhaps the biggest question of the “Killer Within” episode. We hear the gunshot after Maggie leaves the room, but we never actually see Carl do the deed. While sometimes things aren’t shown on camera to heighten the effect, other times it means things might not have happened exactly the way they appear. What if Carl chickened out? Could she still somehow be alive? Or could Lori come ambling out as a zombie at the beginning of the next episode? After the episode aired, Walking Dead creator Robert Kirkman did confirm in a interview that Carl did shoot his mother. Then again, maybe he's just trying to throw everyone off.