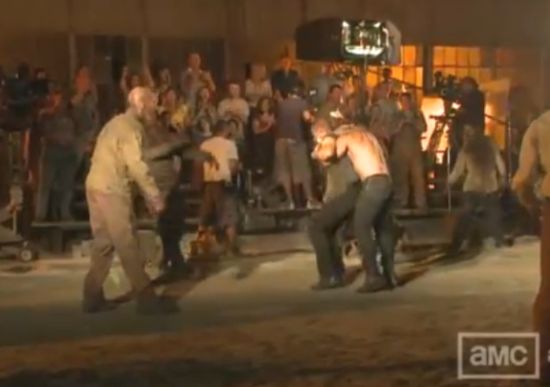 How do you keep a show based on a comic book about a zombie apocalypse realistic? That’s exactly one of the question that executive producer Glen Mazzara addresses in a new making of The Walking Dead video.

One of the big scenes in the “Say the Word” episode of The Walking Dead was the staged fights in The Governor’s arena. Mazzara said, “This was a major part of the comic book. One of the challenges this year is that as we introduce elements from the comic book, we want to keep the show realistic, authentic, rounded. We don’t want it to tip over into a fantastical world. So we were worried about those arena fights. Was it going to feel too heightened? To outside what we actually do. “

However, as worried as Mazzara was about dipping too much into fantasy, he felt everything worked out well. Mazzara added, “And I have to give credit to Angela Kang, the writer of that episode, and Greg Nicotero, our director, and the actors. They kept it grounded, and yet it’s pretty unique. I’ve never seen anything like that.”

Mazzara does raise an interesting point, as the show does have an interesting balance to keep between comic book fans who often want to see more of the scenes from the comics and TV viewers who appreciate the realistic tone of the series. Or at least as realistic a tone as a show about a zombie apocalypse can have. In The Walking Dead season 3, producers have introduced the Katana wielding Michonne, zombie heads in aquariums, The Governor's zombie daughter, and zombie arena fights.

The Walking Dead Producers Want To Keep The Show Realistic