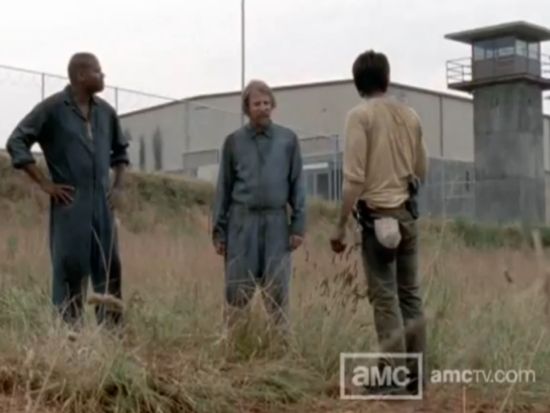 Last week, the “Killer Within” episode of The Walking Dead really shook things up. Not one, but two main cast members were killed off in the shocking episode. At the end of the episode, Rick Grimes was rolling on the ground, sobbing over the death of his wife. It will be very interesting to see where things pick up. Will Rick spend the episode crying the blues or will he pick himself up, dust himself off and go on a zombie killing spree?

This week’s episode of The Walking Dead is entitled “Say the Word.” According to the AMC description, “After another loss, Rick struggles. Michonne remains suspicious of the Governor as he throws a party with a unique twist for the people of Woodbury.”

In the official sneak preview for “Say the Word,” Glenn is digging a grave, when he is approached by the two remaining prisoners. Axel asks Glenn if he needs any help. At first Glenn turns to walk away, but when Axel tells him that his friends were good folks, Glenn corrects him that they were family. Oscar tells Glenn that he’s only had one friend like that in his life and that he’s sorry for his loss. Glenn thinks for awhile, but then he hands the shovel to the prisoners and tells them he needs two more graves.

The “Say the Word” episode of The Walking Dead airs on AMC on Sunday, November 11 starting at 9:00 PM ET. Check out the one minute and thirteen second sneak preview of the episode below.