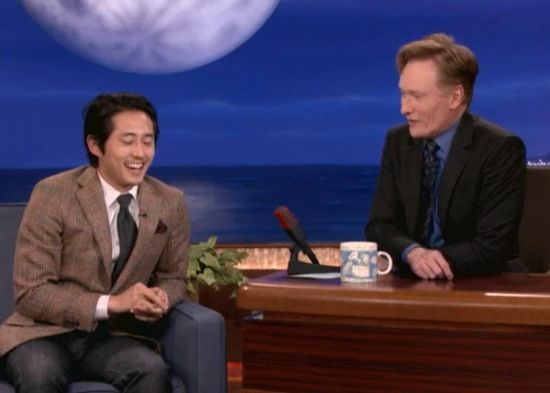 On Monday night’s episode of CONAN, Steven Yeun, who plays Glenn on The Walking Dead, is scheduled to be a guest, and we have an advance clip from the show. In the clip, Yeun tells a story more horrifying than anything seen on The Walking Dead so far.

As most fans know, The Walking Dead shoots in the wilds and woods of Senoia, Georgia. Shooting outdoors in the South means the actors have to deal with mosquitoes, ants, and ticks.

“I’ve had a run-in with a tick,” said Yeun. “It was really bad actually. I went home after a day of work, and I was doing the regular tick check. And then I went to go into the shower. And then I pulled my pants down, and I had a guy on my guy.”

Yeun went on to explain that tick was located on the tip of his member. “I was trying to pull it off,” explained Yeun. “And it was on so tight that I could hold the tick, and hold me as well. I could marionette myself. It was horrible.”

Luckily, Yeun revealed that he eventually got the tick off, then he killed it with a lighter. Yeun said, “It was horrible. It was the worst experience.”

The Walking Dead: Steven Yeun Got A Tick In The Worst Place Possible