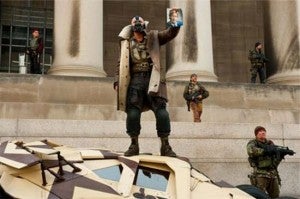 is a better movie than The Avengers.

That's the position taken by the American Film Institute, who have included the film among their ten candidates for 2012's AFI Awards, alongside critical favorites like Argo and Django Unchained. The award "documents the year’s most outstanding achievements in film and television."

The Avengers may have been the top-grossing film of the year, but it's not represented on the list. That said, it shouldn't feel too bad, as it's in good company: The Master, one of the year's best-reviewed movies, is not included either. The exclusion of those films, as well as Robert Zemeckis's Flight, might turn a few heads considering that the award is only open to American productions and Les Miserables, which was nominated, was produced primarily in the United Kingdom.

The TV category if just as populared with genre favorites, including American Horror Story, Game of Thrones and The Walking Dead.

While the movie list is often similar to the Academy Award nominations for Best Picture, this is actually a list of films being honored, not competition for a specific award.

You can check out the full list of honorees below.