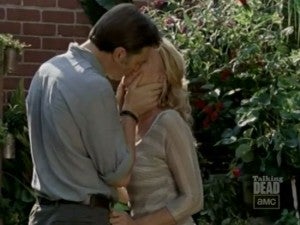 "Does she have to have sex with everything?" That's the question asked at TVLine's Spoiler Alert webseries about Andrea from AMC's The Walking Dead.

The character, played by Laurie Holden, is currently in a relationship with the Governor, the season's villain. Last year, of course, she had a fling with Shane, who served a similar function. TVLine are far from the first to point this out, noting that the writers seem to have a difficult time deciding what to do with the character and that their default setting seems to be "experiment with romantic chemistry."

In the comics, of course, Andrea had a long-standing relationship with Dale, who died much earlier in the TV show and almost immediately alienated himself from his would-be post-apocalyptic life partner.

It goes beyond just the fact that she's had more than one romantic partner in three seasons of television, though; I've seen someone accuse fans poking fun at her character of "slut-shaming" Andrea.

(For the uninitiated, that term means "the act of making someone, usually a woman, feel guilty or inferior, for engaging in certain sexual behaviors that violate traditional gender expectations. These include, depending on culture, having a large number of sex partners, having sexual relations outside marriage, having casual sexual relations, or acting or dressing in a way that is deemed excessively sexual." It tends to be especially inflammatory when the behavior has little to do with the conversation at hand.)

Accusing fans and critics of that is not a fair assessment, though, as it seems most of the most who are taking shots at Andrea's romantic life aren't doing so because they dislike the character or wish to denigrate her. Rather, they're pointing out that the series' writers have taken one of the strongest and most interesting female leads in comics and turned her into a vapid, pointless shell of a person whose most interesting personality trait is that she's drawn to strong, dangerous men.

In the comics, Andrea is an absolutely indispensable part of Rick's survival team, the best sniper in the series and rarely prone to vulnerability or breakdowns beyond what you'd expect to see from any male character in her position. On the TV series, it's virtually impossible to imagine her character as male--or indispensable.

The Walking Dead: The Problem With Andrea

Stitch Crashes Disney's The Little Mermaid in New May Release