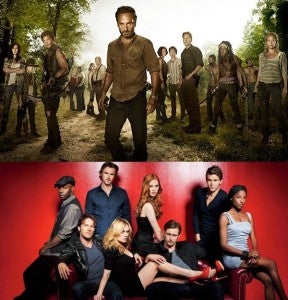 Something interesting happened to True Blood this year: The series of novels upon which it's based...ended.

That makes it somewhat unique among the big fantasy adaptations that are currently ratings gold on cable channels. HBO's Game of Thrones and AMC's The Walking Dead are both based on series that are currently ongoing and so, in some ways, are a living document.

That doesn't mean that the series will be slavish adaptations--in fact, it's True Blood that's one of the biggest proponents of making small changes to the source material to keep the audience on its toes and accommodate the episodic television format.

But it's The Walking Dead, primarily, that's taken that philosophy to a whole other level--having not adapted even half of the printed issues, they've killed off characters who are, ten years in, still alive in the comics, for example--and now there's a new element to True Blood: an endpoint.

That means any character who's introduced, killed or changed in a way that doesn't jive with the books can alter not just the journey, but the destination as well. The Walking Dead still doesn't have that--no matter what happens in a show where the source material hasn't ended, there's always room to tailor the source material in such a way that the other-media adaptation can jive with it.

In short, True Blood has stopped being a living document. It's a complete story, and that comes with both good and bad--but is it limiting?

The Walking Dead has utilized the "living document" format of the series--the fact that there's no destination in place, and so anything you change can only alter the characters' destiny so much--to do all kinds of things. Robert Kirkman has "fixed" things that he wished he didn't do in the comic, and has been able to give himself a mulligan on things like killing Shane too early in the comics and removing Rick's hand, which has proven to be more trouble than it's worth in the books. It's also an effective way of keeping fans on their toes, preventing those who have read the stories from being able to guess what's next at any given time and keeping television as a community event where, more or less, everyone finds out the same information at the same time.

Obviously there's nothing to stop the writers on True Blood from doing the same thing going forward. But any changes made to major characters at this point will create an immediate reaction from the fan base, worried about what the changes mean for the characters' final fate.

Which way do you prefer?

The Walking Dead Versus True Blood: The Challenge of Adaptations