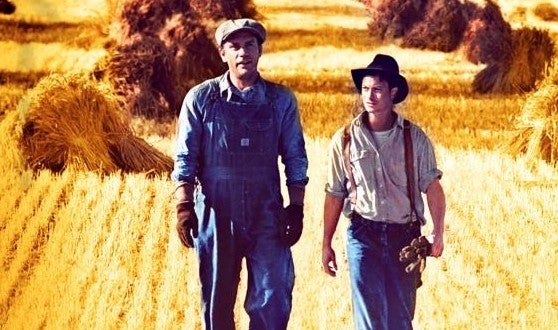 Warning: Spoilers ahead for tonight's episode of The Walking Dead, titled "The Grove."

On the heels of tonight's staggering shock ending on The Walking Dead, Twitter exploded with a number of Walking Dead-related hashtags. That's not unusual.

Perhaps a little more unusual was the fact that one of the hot, trending topics is John Steinbeck's classic novel Of Mice and Men.

That's because the final scene between Carol and Lizzie is an almost beat-for-beat translation of the novel, in which a man is forced to kill his mentally-handicapped friend and longtime companion, after he kills a woman. The murder had no particular malice, but Lenny, who had been a danger to not only people, but lots of rodents, as the title suggested.

When he knew he had to kill him, George took his friend Lenny out to an isolated location and told him a story of their bright future together...then shot him in the back of the head so that his death would be quick, painless and happy. The "look at the flowers, Lizzie," and "everything happens the way it's supposed to," comments that not only assure Lizzie that things will be alright, evoking her parents and giving her a final happy thought before she pulled the trigger.

Here's the text from Steinbeck's novella:

George shook himself again. "No, " he said. "I want you to stay with me here."

Lennie said craftily- "Tell me like you done before."

George said, "Guys like us got no fambly. They make a little stake an' then they blow it in. They ain't got nobody in the worl' that gives a hoot in hell about 'em-"

"But not us, " Lennie cried happily. "Tell about us now."

George was quiet for a moment.

"An' I got you. We got each other, that's what, that gives a hoot in hell about us, " Lennie cried in triumph.

The little evening breeze blew over the clearing and the leaves rustled and the wind waves flowed up the green pool. And the shouts of men sounded again, this time much closer than before.

George took off his hat. He said shakily, "Take off your hat, Lennie. The air feels fine."

Lennie removed his hat dutifully and laid it on the ground in front of him. The shadow in the val-ley was bluer, and the evening came fast. On the wind the sound of crashing in the brush came to them.

Lennie said, "Tell how it's gonna be."

George had been listening to the distant sounds. For a moment he was business-like.

"Look acrost the river, Lennie, an' I'll tell you so you can almost see it."

Lennie turned his head and looked off across the pool and up the darkening slopes of the Gabilans.

"We gonna get a little place, " George began. He reached in his side pocket and brought out Carlson's Luger; he snapped off the safety, and the hand and gun lay on the ground behind Lennie's back. He looked at the back of Lennie's head, at the place where the spine and skull were joined.

A man's voice called from up the river, and an-other man answered.

George raised the gun and his hands shook, and he dropped his hand to the ground again.

"For the rabbits," Lennie shouted.

"For the rabbits," George repeated.

"And I get to tend the rabbits."

"An' you get to tend the rabbits."

Lennie giggled with happiness. "An' live on the fatta the lan'."

"No, Lennie. Look down there acrost the river, like you can almost see the place."

Lennie obeyed him. George looked down at the gun. There were crashing footsteps in the brush now. George turned and looked toward them.

Lennie said, "I thought you was mad at me, George."

The voices came close now. George raised the gun and listened to the voices.

Lennie begged, "Le's do it now. Le's get that place now."

And George raised the gun and steadied it, and he brought the muzzle of it close to the back of Lennie's head. The hand shook violently, but his face set and his hand steadied. He pulled the trigger.

The crash of the shot rolled up the hills and rolled down again. Lennie jarred, and then settled slowly forward to the sand, and he lay without quivering. George shivered and looked at the gun, and then he threw it from him, back up on the bank, near the pile of old ashes.