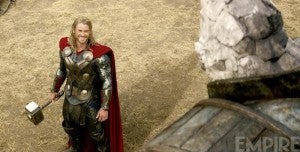 A new Empire Magazine interview sheds some light not just on how Thor gets around without the Bifrost, but how things seem to have gotten so bad, so chaotic between the events of Thor and its upcoming sequel, Thor: The Dark World.

Besides releasing a barrage of new images, which you can see below, the filmmakers spoke with the magazine about the process of making the movie and how it fits into the larger Marvel Cinematic Universe.

"Asgard at the beginning of the first film was at a time of peace," producer Craig Kyle explained. "Now our guys have been fighting for over a year, constantly. It's a time of war. When the Bifrost was broken at the end of the first film, Odin had to conjure a lot of dark energy and go through a lot of personal sacrifice to try and get his son back to Earth."

He added, "And it was a one-shot deal. If Thor didn't succeed, without the Tesseract he couldn't have got back again. And in our film, finally the Bifrost has been rebuilt, but during that time, when the cops were largely cut off from the rest of the universe, you had miscreants that came in from outside the Nine Realms, pillaging and destroying and causing havoc. So that's what our guys have been doing now - trying to put all these fires out across the Nine Realms."

The film's director added that the war won't be without casualties, and that in the time since the first film, Asgardians are starting to learn that immortality isn't all it's cracked up to be.

Thor: The Dark World Producer Explains How Things Get So Bad

Chaos Walking Review: The Little Dystopian Thriller That Could

Jujutsu Kaisen Creator Explains Why We Haven't Seen Hakari Yet

Star Wars: Colin Trevorrow's Duel of the Fates Being Turned Into Comic Book by Fan

WandaVision: What Is Vision's Ship of Theseus Thought Experiment?