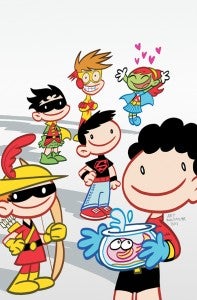 While Tiny Titans set off a barrage of imitators across a wide variety of comics publishers, including many that actually utilized the unique talents of Tiny Titans creators Art Baltazar and Franco, the series itself had a finite life at DC Comics and the publisher--as is often the case with the "all-ages" titles it cancels, never looked back. Well, until now. With Baltazar and Franco doing Li'l Hellboy and other publishers getting in on the fun with projects like Li'l Dynamites, it's perhaps not surprising that DC Comics has apparently gone back to the creators for more. Franco tweeted a few hours ago:

The tweet was later retweeted by DC Entertainment co-publisher Dan DiDio, meaning that even if it's not "official," apparently nobody at DC has too much of a problem with the news beginning to work its way out into the Internet tonight. No further details were available as of this writing; we didn't hear or see anything at New York Comic Con that suggested this information came out of a panel, and not even the gossip sites have anything on it yet. Tiny Titans was an Eisner Award-winning series that launched in 2008 and ended in 2012 with its fiftieth issue. Baltazar and Franco have worked consistently both for DC and other publishers since, in addition to operating the comic book retailer (Aw Yeah Comics) they co-own with Mark Waid and other industry figures in Chicago and a small press publisher by the same name.