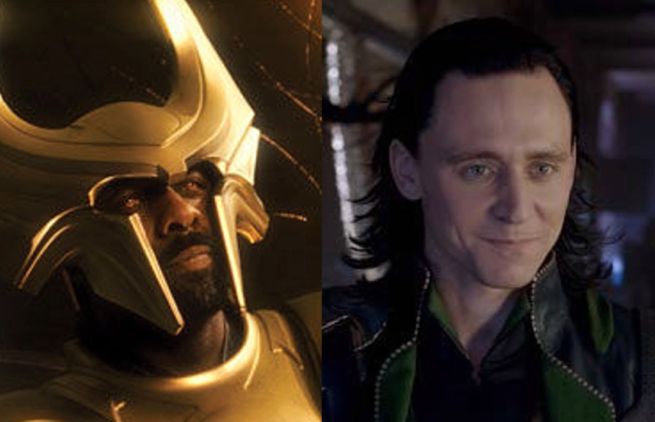 While it was previously thought that Tom Hiddleston's Loki would not be a part of Avengers: Age of Ultron, it has now been revealed by Idris Elba that both him and Hiddleston are actually in the film.

In an interview with the Telegraph, Elba let the detail slip out while talking about a DJ set he had played in a Ibizia nightclub. Elba revealed that the day before the DJ set he had just shot a scene for Avengers: Age of Ultron. Elba said, "And I’m doing a scene with Chris Hemsworth [who plays Thor] and Tom Hiddleston [Loki], and they’re like, [whispers] – ‘Aren’t you [meant to be] in Ibiza?’"

So what is the mystery scene that Elba is referring to that he shot with Hemsworth and Hiddleston? The Avengers: Age of Ultron trailer revealed what appeared to be flashback scenes for Captain America and Black Widow. The Avengers: Age of Ultron clip shown at the Marvel Studios Phase 3 event also featured Chris Evans and Robert Downey Jr. talking about what that Maximoff kid had shown Thor. It's probably likely that Hiddleston and Elba appear in a vision that Scarlet Witch shows Thor.

In addition to mentioning his Avengers: Age of Ultron scene, Elba also talked about the challenge of adjusting from playing Mandela to doing a reshoot scene for Thor: The Dark World. Ebla said, "I’m actually falling down from a spaceship, so they had to put me in harness in this green-screen studio. And in between takes I was stuck there, fake hair stuck on to my head with glue, this f------ helmet, while they reset. And I’m thinking: ‘24 hours ago, I was Mandela’."