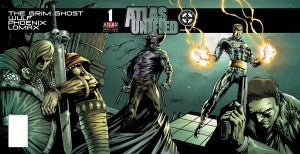 Launching with a #0 at October's New York Comic Con, Atlas Comics has announced Atlas Unified (no, not Image United--that's another thing entirely), a miniseries written by Tom Peyer with art by Jimbo Salgado. The series will connect the various characters of the Atlas Comics universe (including Wulf, Phoenix and Grim Ghost) in a journey through time and space. Peyer, author of O Holy Cow!: The Selected Verse of Phil Rizzuto and onetime Legion of Super-Heroes writer, is best known for his fantastic run on Hourman for DC in the '90s, most recently wrote The Flash with Mark Waid. Look for an interview with Peyer next week at ComicBook.com about the series. Atlas Unified #1 ships in November with three covers, one featuring each of the three major Atlas characters.