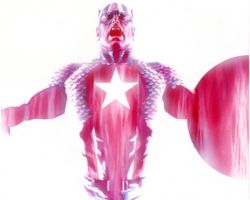 Oh, surprise, surprise, the Steve Rogers version of Captain America isn’t really dead. While many comic book fans will be jumping for joy, I will not be one of the ones celebrating the return of Steve Rogers. Don’t get me wrong, I don’t have any overwhelming dislike for Steve Rogers. It’s just that he was one of the first deaths in comic books that looked like it was going to stick. The fact that he is now coming back kind of ends all hope that death can ever be taken seriously in a comic book, not that there was much hope before. While I guess it might ultimately be a good thing that this American icon is being restored to life, there are also several very good reasons why the Steve Rogers version of Captain America should not be brought back. So to end the suspense, here are my top 5 reasons Captain America should stay dead.

5. It’s not fair to sidekicks. Let’s think about the lot of the superhero sidekick. All superhero sidekicks are doomed to eternally play second fiddle to their superhero. The only thing a sidekick has to live for is the hope that one day their superhero will die and they will get to take over and bask in the fame and glory. Unfortunately, on the rare occasion that a sidekick like Bucky does get to step up and fill his superheroes’ shoes, it always, always turns out to be temporary. It’s just not fair for sidekicks to keep getting kicked back to the curb once their superhero decides to return from the dead.

4. It could start a predictable cycle at Marvel Comics. Ok, ever since the whole Death of Superman thing, DC Comics has had zero credibility when it comes to killing off superheroes. And Superman was only the beginning for DC Comics. They’ve killed off and brought back so many superheroes that I’ve lost count. Flash, Green Lantern, it seems like everyone in the DC Universe has been dead at one time or another. By putting multiple bullets in Captain America in broad daylight, Marvel Comics made it look like they weren't playing the same old game. Mark my words, Captain America dying and returning is just the beginning, count on Marvel Comics killing off Spider-Man next year, and then Hulk the year after, and then so on and so on.

2. Because Bruce Wayne will get lonely. Yes, in that great afterworld where dead comic book characters go until they are brought back to life, Steve Rogers and Bruce Wayne have become great buddies. If Steve Rogers returns to life as Captain America, then Bruce Wayne will have no one to play checkers and sing campfire songs with. It’s not like Barry Allen is there anymore, so poor Batsy will be all by himself. Well, not all by himself, but do you really see Batman spending quality time with Marvin White or Jonathan Kent.

1. One Great Depression is enough for any man. Steve Rogers already lived through one Great Depression. It simply wouldn’t be fair to bring him back during the economic mess that we’re currently in. Will Steve Rogers be able to find work? Will he ask to be shot again when he takes a look at his 401K? No, if Marvel is going to insist on bringing back Steve Rogers, then they should at least have the decency to wait until the economy improves.

The Weekly Pull: American Vampire 1976, Hellions, The Me You Love in the Dark, and More