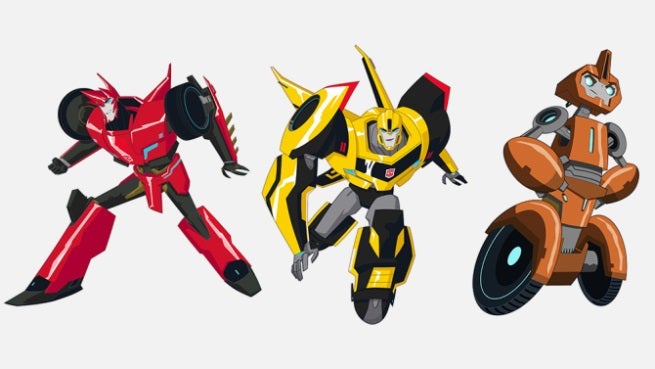 Hasbro will launch a new Transformers animated series, titled Transformers: Robots in Disguise, in spring 2015 (via Variety). The series will air on The Hub network and feature the voices of Darren Criss (Glee), Constance Zimmer (House of Cards), Mitchell Whitfield (TMNT) and Ted McGinley (Married with Children).

The series features a newly redesigned Bumblebee, as well as brand new characters, including Sideswipe and Fixit (all three are pictured above).

Transformers: Robots in Disguise will take place years after the events of Transformers Prime. Bumblebee travels to Earth and brings together a ragtag band of Autobots to defend the planet against a new group of Decepticons. Bumblebee’s team will include a rebellious young robot, an elite guard in training, a Dinobot and a Mini-Con.