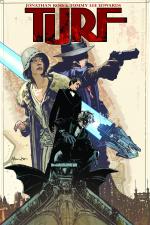 Today saw the release of another American-British partnership, but of the comic book kind, not the political sort. Turf #1, the first of a four-issue limited series from England's Jonathan Ross and America's Tommy Lee Edwards, hit shelves today, and the co-created project, released by Image Comics, takes us back to a different era and place in history. Recalling the days of Prohibition-era New York City in the late 1920's, the gang wars of old become the backdrop in this tale of the intersection between the established mob families and bosses of the day, a new family of vampires who are looking to make a move on the city and a strange alien presence only hinted at in this premier issue. A lot of ground is covered here, and while the artwork and coloring of the book provide an appropriate dark, harsh feel for the era communicated, the story as a whole follows standard, boilerplate protocol for gang war drama, with exceptions for the vampire/alien pieces, but even that feels forced and rote. The story unfolds with an initial nod to a recent slaughter of a high-ranking mob boss and his men, all to the snoopy delight of young society reporter Susie Dale, who finds the world of bootlegging, sold girls and blood money disgusting, but seeks to exploit and expose the underworld at the same time. The narration gives us an interesting overview of the world in which these characters live, and it's here that Edwards' art shines, conveying the tightness, violence and dark that exists as the events leading up to that horrific killing unfold. Once the story returns to the actual characters of the piece, the familiar comes back, and it's very similar to conventional approaches to genre pieces of its kind. For instance, the appearance of the Dragonmirs, a family of vampires new to New York City from Eastern Europe, establishes them as shady and sinister, with their sites set on fulfilling some sort of horrible prophecy. The younger of the clan, Stefan, has other plans, and decides to take on the mob bosses directly, setting up a predictable showdown in the Biltmore Hotel. Plucky Susie is also a player, and her wholesome aloofness is stretched to its limit. Observing a party she's covering for the Gotham Herald, she notes the corruption between the mob, the mayor and the cops, which is news to no one who has ever read or seen a story about gangsters in the "big city" from this era. Of course they're all in cahoots, that's half of any story focusing on the underworld from this era. As the story moves along, the uneasy tension between the mobsters is revealed through Eddie Falco, another one of our central figures, and perhaps one of the most hard-boiled, no-nonsense figures in these pages. He begins to search out the truth behind the killings in the hotel, and we can only assume future issues will lead him to the discovery of what Stefan Dragonmir is behind. The appearance of an alien ship from outer space just before Falco begins his search adds a combined element of "hmmmm" with "what?", setting up a potential odd or ingenious element in future issues, although much is not revealed here, expect for some high-powered cargo that could be very dangerous in the wrong hands. There's a needlessly wordy and long-winded argument between the Dragonmir brothers, which serves to highlight and tell us not only their conventional, Eastern European vampire history, but their internal disagreements over staying in the shadows versus Stefan's approach of taking the city head-on through violence. The issues begins to wrap-up with our focus taken to varying perspectives of our main characters, and the curious alien, as the set-up for issue two is present, and another curious death occurs just before the issue ends. While there are some highlights to the series, the narration in many places and of course Edwards' distinct artistic style, lend the appropriate feel to the piece, but the execution falls back too often on the familiar, even though a new take on the gangster motif includes vampires and aliens, even that fails to bring Turf #1 to life in a way that makes us examine tropes and characters we've seen before in a way that is new and fresh. Many of the answers to the next three issues are already here, as we've seen this period piece play out before, even with these somewhat unconventional character twists.

Turf #1 Fails to Mark its Territory