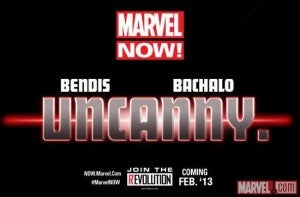 The latest Marvel NOW! preview, which seems to show Cyclops's visor-light behind the word "Uncanny," has prompted some to question whether Uncanny X-Men, one of Marvel's move long-standing and venerable titles cancelled following Avengers vs. X-Men, may be relaunched under the creative team of Brian Michael Bendis and Chris Bachalo.

The hero, whose turn to the "dark side" after being possessed by the Phoenix Force led him to kill his mentor and father figure and emerge from the massive crossover series as the baddest bad guy in the land, seems to be headed toward some kind of redemption as he works to stop Mister Sinister from unleashing some nefarious plans in Avengers vs. X-Men: Consequences.

Most fans and critics weren't particularliy impressed with the way Cyclops was written in AvX, so it's entirely possible that leading a new X-Men team (even if it's one made up of his "Extinction Team") could tell a rather interesting story in terms of giving him a path to redemption, and give some of those irate fans a little of what they're hoping for.