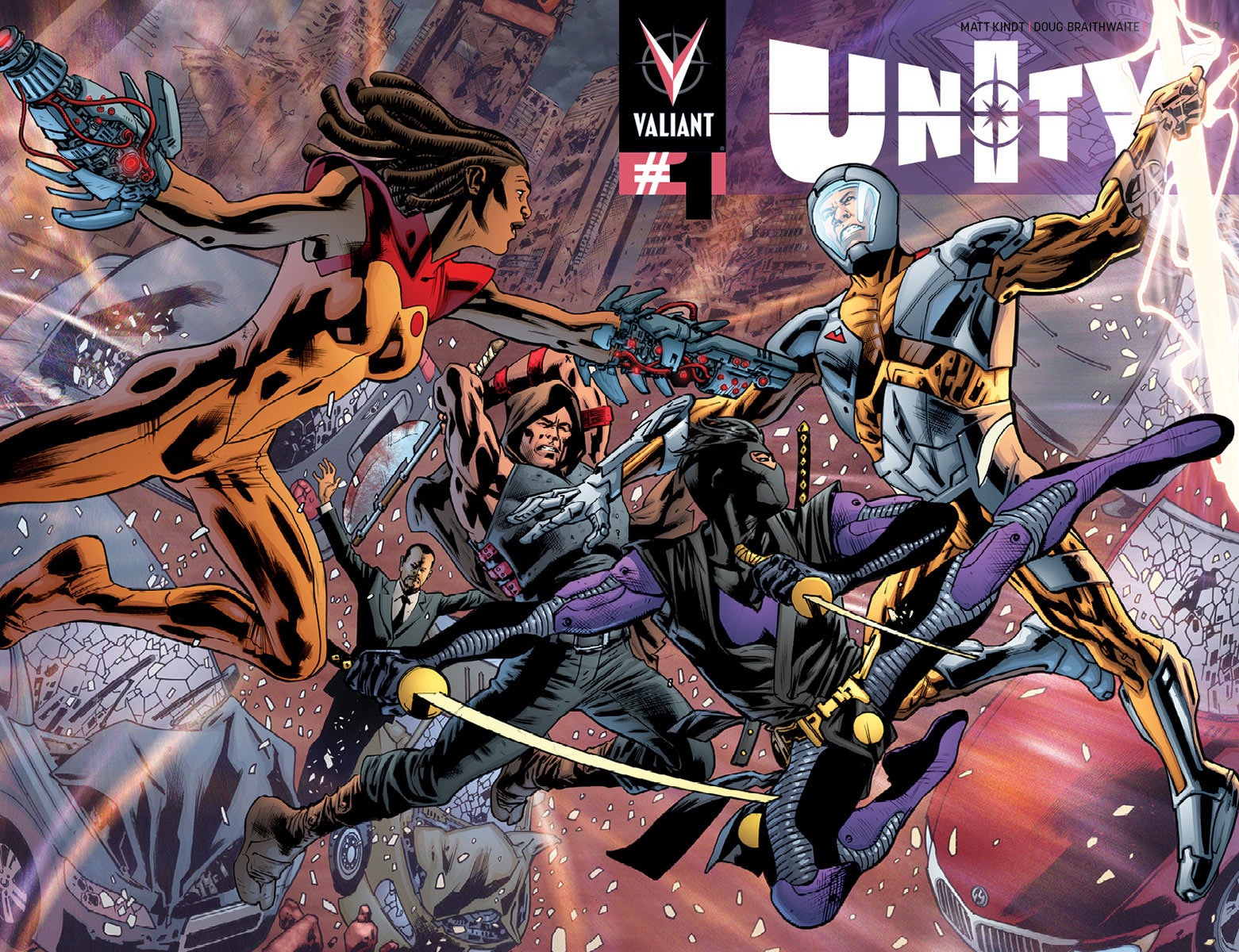 Following on success that saw Unity #1 sell nearly 70,000 copies--that's a huge number for a non-Marvel, DC or Image Comics title--Valiant Entertainment announced last night that they will make the second and third issues of the series fully returnable, to give retailers an opportunity to increase their orders at no risk. The first issue hits comic shops November 13 and is expected to sell out at the distribution level. Unity, which teams a number of Valiant Universe superheroes and pits them against X-O Manowar, represents the first team book at the company since they relaunched just over a year ago. Bloodshot and the H.A.R.D. Corps could be counted as well, but that's more like a Green Lantern Corps-type book where multiple characters with the same backstory and a shared history in a solo book team up. "Based on pre-orders alone, UNITY #1 has already outranked a slew of other recent success stories including East of West #1 Hawkeye #1, Lazarus #1, Manhattan Projects #1, Pretty Deadly #1, Saga #1, Satellite Sam #1, Sex Criminals #1, Ten Grand #1, Trillium #1, Velvet #1, The Wake #1, and the list goes on," said Valiant Sales Manager Atom! Freeman. "That's incredible company to keep, and all of us at Valiant would like to thank the fans and our retail partners for their confidence and support. UNITY #1 is a major milestone for us as a publisher and our biggest launch to date. This sales figure only affirms that big things are on the horizon for this series, and that Valiant isn't slowing down one iota." "UNITY #1 could be our most important single issue to date, and we couldn't be happier with the sales and excitement leading up to its debut. Matt Kindt and Doug Braithwaite are delivering something truly magical with this series and issue #1 is a pitch perfect first step. It's innovative, powerful and brilliant - there's simply nothing like it on the stands today, " said CEO & Chief Creative Officer Dinesh Shamdasani. "Moreover, we've gone all out to ensure the series delivers to both fans and retailers. We've added returnability for issues #2 and #3, and have even bigger plans for the second arc of UNITY beginning with issue #5 next March. Keep your eyes peeled – we've even included a top secret teaser of things to come at the end of the first issue."