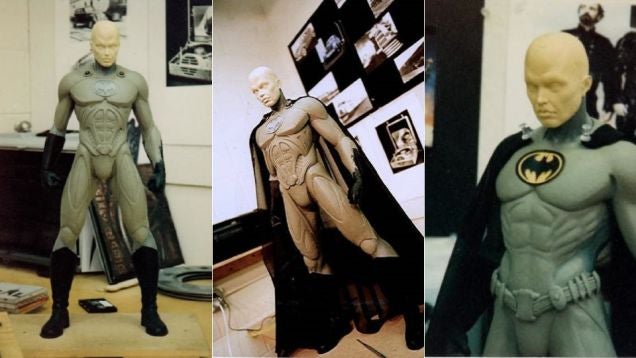 Over at io9, they've got a look at a trio of unused suits from Batman Returns and the never-produced third Tim Burton/Michael Keaton Batman collaboration.

You can check them out above.

While the original story reported that they were all from Batman 3, Nailbiter111 from Comic Book Movie corrected them that two of the suits actually appear on a website listed as unused Batman Returns concepts.

The images and concepts apparently come from sculptor José Fernandez, who worked on them. They were apparently uploaded to the Brotherhood of the Bat message board before going viral.

The version at the far right most closely resembles the recognizable Keaton Batsuit, excepting a new, more Dark Knight Trilogy-like utility belt. In the others you can see some of the detailing that would ultimately make its way into suits from Batman Forever, Batman and Robin and, to a lesser extent, the Nolan films. It's interesting that all of them retained what appears to be the same Batman emblem from the Burton films, which of course started to be tweaked immediately after Burton and Keaton left and has never reappeared.