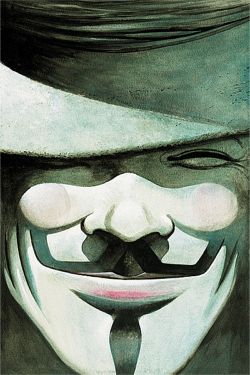 While The Watchmen is the Alan Moore work that is getting the most attention right now, DC Comics just made a major announcement concerning a collection of another Alan Moore work. The V For Vendetta Absolute edition has been expanded by 100 pages at no additional cost. V For Vendetta originally started as a series in Warrior, which was a comics anthology published in England. Warrior was canceled before the story was completed, but the story was later finished and published as a ten issue mini-series by DC Comics' Vertigo imprint. V For Vendetta is written by Alan Moore with artwork by David Lloyd. The additional 100 pages added to the Absolute edition includes all of David Lloyd's silent art pages from the original comic book series. This artwork was not in the previous V For Vendetta collected editions, and the last time it was published was in the original DC Comics publication back in 1988 to 1989. Also, there will be an expanded version of the sketchbook section from the previous hardcover and all of the back cover art from the original issues will be included. In addition to the 100 pages, the V for Vendetta Absolute edition has improved production values and coloring from the 2005 hardcover edition. The Absolute V For Vendetta hardcover is scheduled to arrive in comic book stores on August 19, 2009. The Absolute edition will be 396 pages with a suggested cover price of $99.