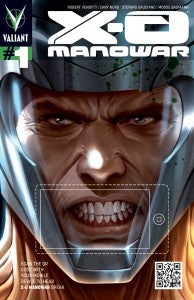 It will be a busy week for comic book fans! With Marvel's The Avengers hitting theaters on Friday and Free Comic Book Day descending upon the direct market the day after that, apparently someone decided that the first bit of the week just wasn't cool enough. Well, no more of that. Thursday, May 3--just a day after Valiant Entertainment launches X-O Manowar #1, the first Valiant comic published in ten years, a number of the company's new creators will appear for a panel at Midtown Comics in Manhattan. Featuring streaming video and a realtime audience Q&A, the panel will be populated by Valiant writers and editorial voices and will take place Thursday night at 8:30 p.m. EST, making it just late enough that our friends on the West Coast will be home from their 9-to-5 jobs by then. The publisher describes the event as follows:

This Thursday, May 3rd, Valiant and IGN are partnering for a one-of-kind online experience,VALIANT LIVE: X-O MANOWAR #1, direct from New York's own Midtown Comics! Moderated by IGN Comics Editor Joey Esposito, the inaugural VALIANT LIVE panel will be bringing the convention experience to comics fans far and wide with live streaming video and real-time audience Q&A on May 3rd from 8:30-9:15 PM EST (5:30-6:15 PM PST)! Hitting just one day after the release of X-O Manowar #1, this is your chance to find out all there is know about the foundations of the all-new Valiant Universe directly from a star-studded panel of guests including Robert Venditti (X-O Manowar), Fred Van Lente (Archer & Armstrong), Executive Editor Warren Simons, and Chief Creative Officer Dinesh Shamdasani. Via the interactive Big Live platform, viewers will be able to ask questions directly to the panel and converse with other fans. Expect surprise announcements, and a behind-the-scenes look at a ton of unseen art from X-O Manowar, Harbinger, Bloodshot, Archer & Armstrong, and Valiant's upcoming Free Comic Book Day release!And all you need to join the conversation is an internet connection! Just visit comics.IGN.com,Facebook.com/ValiantComics, or ValiantUniverse.com/News to participate and get a jump on the Summer of Valiant as it happens!In the meantime, fans can submit questions ahead of time via Twitter to @ValiantComics and@joeyesposito with the hashtag #AskValiant. The best of the bunch will queued up and ready to go when VALIANT LIVE: X-O MANOWAR #1 kicks off live on May 3rd at 8:30 PM EST (5:30 PM PST)!