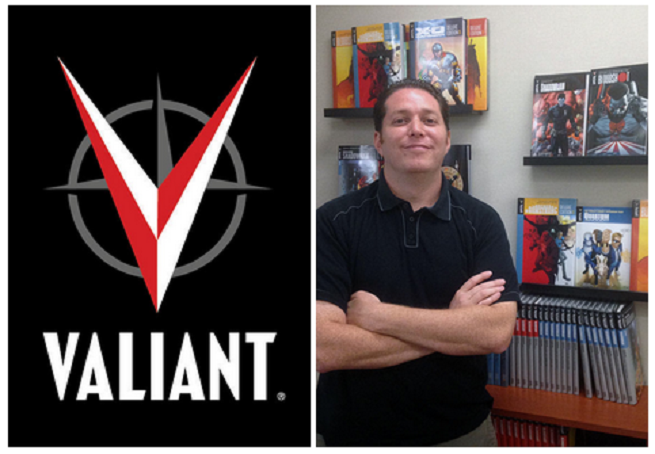 Valiant Entertainment announced today that they have promoted Executive Editor Warren Simons to the role of Editor-in-Chief.

Prior to joining Valiant as Executive Editor in 2011, Simons had a long career as an editor at Marvel. Since then, he has overseen the relaunch of the resurgent publisher's comic book line with an array of best-selling, critically acclaimed series including X-O Manowar, Harbinger, Bloodshot, Archer & Armstrong, Unity, Rai, and more.

In his new role as Editor-in-Chief, Simons will continue to preside over all day-to-day operations of Valiant's editorial department, and manage Valiant's growing editorial team. Additionally, Simons will also continue to edit a stable of Valiant's flagship series and special projects, including Rai, Unity, Harbinger, X-O Manowar, and this summer's Armor Hunters crossover event.

"Warren has been an enormous asset in Valiant's tremendous success. He's built one of the most talented rosters of creators anywhere in comics today, and has played an integral role in accomplishing the numerous critical and commercial successes that Valiant has achieved in a very short time," said Valiant Chairman Peter Cuneo.

"Warren has played an essential part in making Valiant one of the most well-regarded and formidable publishers in the industry," said Valiant CEO and Chief Creative Officer Dinesh Shamdasani. "Our exceptional success to date has built the perfect platform for future growth. We have even bigger plans for the next three years. The future is bright for Valiant and we're proud to have Warren playing an even bigger role."

"Valiant is a company that was built and defined by some of the greatest visionaries in the medium, and it's an honor to be named Editor-in-Chief at this extraordinary publisher," said Simons. "It's an absolute privilege to work alongside such incredibly talented and dedicated colleagues and creators every day. In the last three years, the teams have helped fashion a new, bold voice in the industry, and 2014 is going to be an amazing year for Valiant and our fans. I'm energized and excited for what's on the horizon."

During his tenure at Valiant thus far, Simons' co-architected the revival of the Valiant Universe – the largest interconnected comics universe outside of Marvel and DC – beginning with X-O Manowar #1 2012. Selling in excess of 50,000 copies, the issue ranked as one of the year's best-selling new series from an independent publisher, and was followed in quick succession by the "Summer of Valiant" – a slate of new ongoing titles, including Harbinger, Bloodshot, and Archer & Armstrong, that each debuted to rave reviews and sold-out status.

After multiple awards and nominations, including a 2012 Diamond Gem Award for Publisher of the Year, Valiant forged even farther in 2013 with the debut of its first crossover event, Harbinger Wars, and the release of Unity #1 by writer Matt Kindt and artist Doug Braithwaite – the year's highest charting debut issue from a non-premier publisher with sales in excess of 70,000 copies. Just this past May, Valiant followed up with "Valiant First" – an all-new line of titles led by the ongoing series, Rai, and its biggest crossover event to date, Armor Hunters.