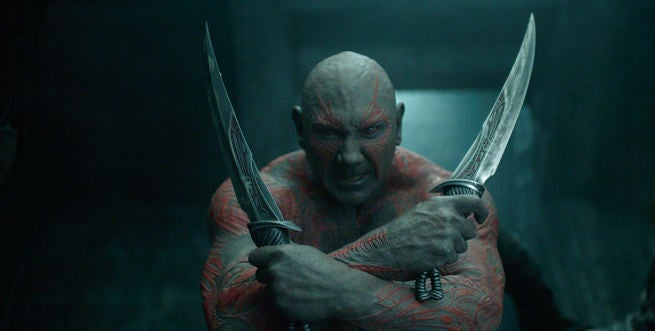 In a new video posted to Facebook, former WWE Superstar and Guardians of the Galaxy star Dave Bautista floats through the air like Tinkerbell.

...I guess you can get away with that when Disney is the parent company.

The video, of course, was posted by director James Gunn and it seems likely this was acutally green screen meant to show him swimming up out of the pit full of Celestial fluids that Drax was thrown into by Ronan following the film's first major fight scene. While the final cut of the movie only featured him "underwater" for a few seconds and rescued by Groot more or less offscreen, one of the first set photos released from the film was of Bautista in a tank of water which, in hindsight, seems likely to have been during that sequence.

All of that is, of course, speculation and shouldn't be considered Gospel. Certainly there's nothing in Gunn's video to give this context.

Update: After we finished reading through the comments and started working on the story, apparently Gunn updated with a clarification. This has nothing to do with the water tank at all. Here's one of our commenters...

It was from the scene in the Klyn where Drax rips a robot in two (from the horse's mouth, further down in comments).