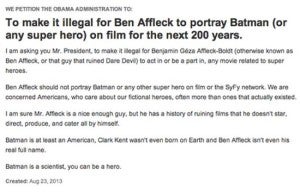 With a controversial casting choice like putting Ben Affleck in the Batman role, there are bound to be people who disagree with the decision. And when people disagree with something in our modern day world, they start online petitions. One of the most popular online petition systems is the White House Petition system, which "allows all Americans to ask the Obama Administration to take action on a range of important issues facing our country."

There has been all sorts of fun had with the White House petition system. For example, who can forget the petition calling for the construction of a Death Star, and the White House's hilarious response. However, it appears that the people of America have gone too far with one of their latest petitions. After Warner Bros. announced Ben Affleck had been cast as Batman, a White House petition was started to make it illegal for Ben Affleck to portray Batman (or any super hero) on film for the next 200 years.

However, just as the petition was getting going, the White House canceled the petition for being in violation of their terms of participation. While it might be ok to petition the government to spend billions on building a massive machine of death and destruction, it's crossing the line to try to stop the guy who starred in Gigli from playing Batman. After all, Gigli was a long time ago, and Ben Affleck's most recent accomplishment was telling the story of a brave CIA agent who helped rescue American hostages in Iran in the eighties. Hmmm...government conspiracy, anyone?