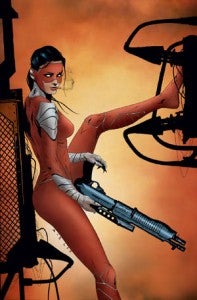 Marc Andreyko is a comics writer with over 15 years of experience working with independent publisher, Marvel, DC and everywhere in between...but really the thing that defines his career for most people is Manhunter. For 38 issues and then a handful of backup stories in Batman: Streets of Gotham starting about ten years ago, Andreyko reinvented a languishing DC property as one of the most interesting and thoughtful superhero comics on the market--one that received praise from outside of regular comics circles for having a strong (but flawed) female lead with an ex-husband, a son and a strong and diverse supporting cast that drew from a mix of new characters and those with a history in the DC Universe. It was the kind of run that could have defined just about anybody's career, made even more impactful by a series of not-quite-cancellations where the book's final issue would be solicited only for fans to petition and badger the publisher until it was at last allowed to return. And since the New 52 launched, Andreyko has made no secret that he'd like to see more of Kate Spencer--but he hasn't been in a position to make that happen, not having had an ongoing series in the New 52. It makes sense to bring her into the New 52; in her civilian identity as a district attorney, Spencer recently appeared on The CW's hit DC Comics adaptation Arrow. Nevertheless, she's one of those characters who hasn't quite made their way back yet, in no small part because "legacy" heroes--ones who have the name and/or power set of another, older and more-established, have generally not been welcome (ask Cassandra Cain or Wally West fans about this--believe me, they'll tell you). A fan put the question to Andreyko directly on Facebook today, though: "I have a question, Are Gotham going to be plagued by a crusading lawyer called K.Spencer? Please, make my wish and bring Kate to new 52 as a lawyer first, later as you know know who..." Andreyko didn't answer--and likely can't, since one way or another DC would want input before he could go public with any plans that major...but he did like the question. Subtext, a hint...or wishful thinking? Manhunter #25 by Andreyko and artist Jeremy Haun will be on the stands in November.

Will Batwoman's Andreyko Introduce Manhunter Kate Spencer to the New 52?