Peter Georgiou of the pop culture website Think McFly Think has sparked a new round of rumors surrounding Dwayne "The Rock" Johnson's involvement in the DC Cinematic Universe, suggesting that the actor may be in talks to portray John Stewart, the African-American Green Lantern who most insiders expect to replace Hal Jordan in the next screen appearance of the sci-fi superhero.

Georgiou cautioned that his words were just a rumor and he didn't talk to the original source, but that he's heard through the "industry grapevine" that Johnson might be the next Green Lantern--either in Batman vs. Superman or in another film--perhaps Justice League, or another Green Lantern standalone. He added that whether or not Hal Jordan is addressed in the next Green Lantern appearance, it's his understanding that Ryan Reynolds is officially out.

That last bit will surprise no one, but there has been some (mostly fan) speculation that the critically-reviled Green Lantern film might be integrated into a DC Cinematic Universe eventually, which would allow Zack Snyder and company to spend less time designing the Corps, the costumes and the like. Nobody I've spoken to in the industry has ever found that scenario to be too likely. 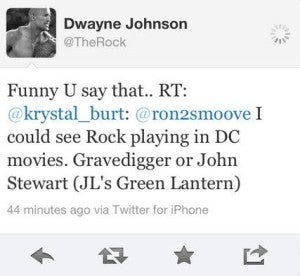 All that said, if the reports that Georgiou are hearing are accurate, it seems likely that the character will make at least a cameo in Batman vs. Superman--as he suggests that the Fast 7 hiatus has played a role in opening up Johnson's schedule for whatever the DC role is that he's in talks for.

"He spoke with DC previously about a future with them, then because of the Fast 7 hiatus, things sparked up again," Georgiou tweeted.

That suggests that whatever The Rock is cooking up with DC Entertainment, the next few months while Fast 7 is being reworked could be key to its development--which, to us, says "Batman vs. Superman."

Georgiou stresses again and again that he's not sure just how likely this scenario is, although CBM found an old tweet where The Rock seems to tease the possibility. He (Georgiou) says he wanted to say it out loud so other reporters could try and find something out. We're asking around...

Will Dwayne "The Rock" Johnson Play Green Lantern in Batman vs. Superman?