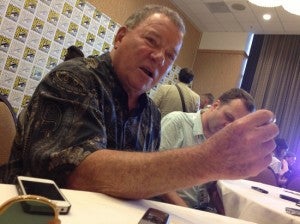 This weekend, as the entertainment world was reeling from (and reacting to) news that Ben Affleck was cast as Batman in the forthcoming Man of Steel sequel Batman vs. Superman, William Shatner went where no man had gone before--and used it as a job application.

Here's the (tongue-in-cheek) tweet from the onetime captain of the U.S.S. Enterprise:

@BenAffleck Congratulations! If you need an Alfred let me know! ;-)

Joking aside, it could be an inspired bit of casting--if Alfred even appears in the film. Fans have been aggressively casting Alfred, Commissioner Gordon, Robin and even Lucious Fox in their heads, in spite of the fact that the film is a Superman sequel and while Batman will appear, it's not yet clear that any other Gotham-based characters will have much of a role to play.

Reporters, meanwhile, haven't had any serious Alfred rumors pop up yet--although Michael Caine did say he'd take the job back if it were offered to him, and Man of Steel producer Christopher Nolan told him that was fine--as long as he gets a cut.

William Shatner Wants To Be Alfred in Batman vs. Superman