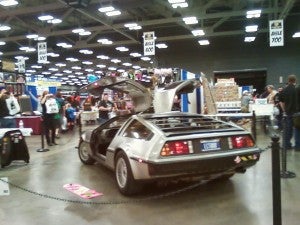 By Morag MacPherson, Contributing WriterNote: For the moment, Ms. MacPherson's stories will be posted by ComicBook.com Senior Staff Writer Russ Burlingame. With a little luck, we'll get that hammered out by the end of the weekend.

Wizard World Austin Comic Con  has just started rolling deep in the heart of Texas, with only a few of the autograph booths opening and more than a couple of bare tables in the Artists' Alley. But the local comic and fan community made sure that the convention hall was already a loud and full of energy minutes after the doors opened. And in what is sure to be a peek of the future and happy news for everyone, at least half of those voices belonged to women -- we're not just for cosplay anymore. Women fans of all ages, colors, and willingness to show skin are coming together, organizing, running charities and podcasts, along with showing their arts and wares. Among the first booths to pull me over was the D20 Girls Project, a non-profit organization of girls in "all shapes in sizes," who appreciate gaming, sci-fi, comics -- "You name it, we've got a girl in the fandom for it." said Alyssa, the Texas state manager. They were sharing enthusiasm with their booth buddies, Cosplay for a Cause, which is running a competition during the Con to raise fund for Safe Place, the local anti-domestic and sexual violence resource center and shelter. D20 puts out a quarterly magazine and a free weekly and is looking for contributions from all my fellow fangirls -- cons you've been to, experiences you've had while gaming or in the industry, to end a number of stereotypes, especially the ones about us not existing. 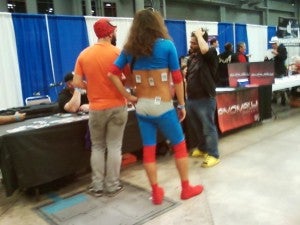 That became even more clear as, while observing in quiet awe a bizarre cosplaying male slutty-Spider-Girl covered in coupon decals, I was waved down by Jen Rhoades of Anomaly Podcast. These girls , many of them Texans, have put women's chocolate into geekdom's peanut butter, analyzing all sorts of standard sci-fi and fantasy shows, movies, and books and then doing things like comparing them to Broadway "it's not just for gays and girls anymore" musicals. We had a nice long chat about how the terms "fanboy" and "fangirl" have in many ways changed in meaning far beyond indicating what's underneath the clothes. A fangirl can sometimes fanboy -- get into the statistics, the completionism, the minutiae of continuity, while fanboys sometimes get their fan-girl on: obsessing about family dynamics in character development and wax poetic about the emotional and psychological implications of any and every plot development -- but the discussions overheard from a fanboy booth versus a fangirl booth were pretty easy to tell apart. 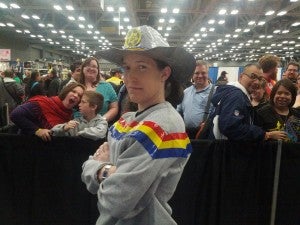 Speaking of clothes and theater: it's amazing how good the cosplay can get when you involve local theater costumers and Ren Fest performers with the boys huddled on the other side of Dragon's Den. Mea culpa on the lack of pictures today (I fear cameras and none of my fanboy cadre had brought along so much as a smartphone), but that Cosplay Contest is going to be quite the battle. My personal favorite so far was the Sparks McGee in front of me at Wil Wheaton's booth, who made her Stetson entirely out of duct tape. I wasn't the only one impressed: Wil himself had to take picture (that's it on the right). One of his routine sign offs was, "Thanks for reading my blog," so hopefully you guys will have a chance to see this amazing piece of ingenuity over there (and if you know who Sparks McGee is, well, you've probably already have Wil's blog open in another tab). For you fanboys that have been so patient while I let out my fangirl squee about the psychology and demographics of the con, there is some serious fanboy news to come: Atomic Robo volume eight, new Walking Dead in the CBLDF's Liberty Annual coming out on Wednesday, Zenescope working with the History Channel because SCIENCE IS REAL -- with some really amazing artists and writers connected to the project -- and then what happens if you leave a tape recorder on and sit and chat with Ken Levin of First Comics for two hours (sneak peek: you laugh your ass off, learn a whole lot about the industry's history and current dynamics, and get AMAZINGLY excited for the relaunch, because I'm not sure there's a better eye for talent in the industry).