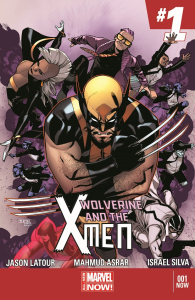 Few of Marvel's recent cancellations have disappointed more fans than the end of Jason Aaron's run on Wolverine & the X-Men, which brings the series to an end in February. This March, however, the ol' Canucklehead is getting the gang from the Jean Grey School back together for All-New Marvel NOW! in Wolverine & The X-Men #1, from the creative team of Jason Latour and Mahmud Asrar. The announcement comes just as The Wolverine is released to DVD and Blu-ray, and Blu-ray copies include a digital redemption code for an exclusive, custom Wolverine comic featuring the Silver Samurai and co-written by Latour and Marvel Comics legend Stan Lee. "As we've seen this first year or so of the Jean Grey School has been a hard road. As a result we'll begin with a lot of the teachers and students sitting on the edge of their seats just waiting for the bell to ring," explained Latour. "Those that are left are the teachers and the kids who basically have nowhere to go. Headmasters Wolverine and Storm are spending the summer with  Quire and Evan and Idie. The kids who are among the most potentially powerful and dangerous mutants alive. In them we could be witnessing the growth of the next GREAT team of X-Men, or the creation of the biggest threats the Marvel U will ever see." If you thought the inaugural year of the Jean Grey School was crazy – you ain't seen nothing yet! The X-Men of tomorrow have faced dangers unlike any other, and it's not going to get easier any time soon. Summer School is in session, with new dangers, new faces…and is that Quentin Quire as a teacher?!?!? And with Fantomex joining the staff, what could possibly go wrong? Get ready for an explosive new start for the Jean Grey school this March in Wolverine & The X-Men #1 – if they survive that long! WOLVERINE & THE X-MEN #1 Written by JASON LATOUR Art & Cover by MAHMUD ASRAR ON-SALE THIS MARCH!

Wolverine & the X-Men Relaunches With Jason LaTour and Mahmud Asrar