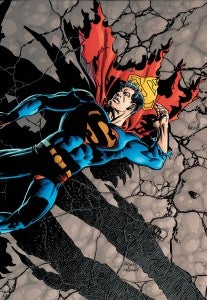 Having revealed that Batman: Year one will be out in stores before the San Diego Comic-Con this year, much of today's DC Comics: All Access panel at WonderCon was taken up with members of the panel taking on questions about the New 52 relaunch initiative, some of which would seem to have been answered already. Newsarama reports that a fan asking whether Superman had died in the world of the New 52 was greeted first with a joking answer from Superboy writer Scott Lobdell, and then with a more serious answer from Executive Editor Eddie Berganza, who gave a definitive "maybe." That flies in the face with not one but numerous earlier references that creators and editors at DC have made to the best-selling Death of Superman story (written and drawn by incoming Superman co-writer and penciller Dan Jurgens) having happened in the new continuity. At the same time, a fan who asked after the status of former Batgirl Stephanie Brown was not only told that (like Wally West and Donna Troy) there were no immediate plans for the character, but that panelist Bryan Q. Miller, who had written Stephanie's series when she was Batgirl, was waiting to hear from DC about it as well. As far as plans to reverse course, a fan was told that while Pandora and the Phantom Stranger may be aware of the changes made to the DC Universe following Flashpoint, they're in no position to repair them and the New 52 is here to stay. They also suggested that the "merging of three world" that Pandora did at the end of Flashpoint was successful, as Scott Lobdell told a fan that as a writer he no longer perceives a difference between DC Universe characters and those imported from WildStorm when DC bought that company from (now DC Co-Publisher) Jim Lee.

The Flash: One Minute War Special #1 Review: Blink And You'll Miss It