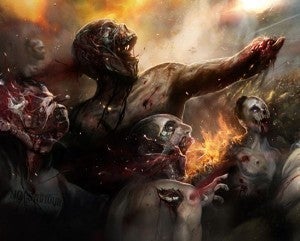 Ever since G.I. Joe: Retaliation went back for reshoots under the guise of adding 3D, a number of big holiday and summer tentpole movies have been shuffling their release dates like that one move broke a logjam of activity that studios have been wishing they could justify.

Among other things, Thor 2 will now be opening November 8, 2013, a week before it had originally been scheduled, while movies like G.I. Joe and Spielberg's Robopocalypse dropping back nine months to work on their films. World War Z has now joined that list--the project, which has had a history of not really knowing what to do with itself from the moment it was optioned for adaptation, finally looked like it was on its way to a release date, finally. Then it wasn't. And now it appears that the movie isn't totally shelved, but that at least headlining star Brad Pitt--and possibly others--will be required to go back for seven weeks of reshoots.

That's not an insubstantial amount of time; for context, the film Rocky was shot in 28 days, and their special effects were practical rather than digital, which slows down the shoot.

The film--co-written by Before Watchmen's J. Michael Straczynski--is being billed as something that sounds a lot more action-oriented than the book it's based on (which is, essentially, a fictional oral history of a worldwide pandemic and war that hasn't happened), and it's possible that if the action wasn't working, they could be bringing Pitt back either to freshen it up or to shoot more introspective character material that would make it more closely mirror the source material.

World War Z is currently schedule to hit theaters on June 21, 2013, although that date was set in March and it is unclear whether the reshoots will affect it.