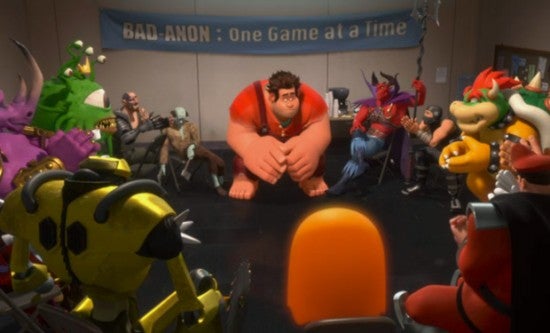 The animated video game comedy Wreck-It Ralph has a sequel in the works, according to composer Henry Jackman, who scored both that film and Captain America: The Winter Soldier.

Released through Walt Disney Animation Studios, Wreck-It Ralph went on to generate around $200 million domestically and more than $450 million worldwide. Disney Animation's next big project, though, was Frozen, which crossed $1 billion at the box office last year. Up next? The Marvel Comics adaptation Big Hero 6 which, as far as we can tell, will be totally divorced from the Marvel Cinematic Universe -- the first Disney project to be set up separately from the Avengers films, since both ABC's Agents of S.H.I.E.L.D. and the Netflix-released Defenders projects will take place in the same shared universe as the existing films. That film will debut on November 7.

“I can’t tell you more, not because I’m being coy, but I believe that it is officially on the cards,” Jackman told Variety. “I don’t know any more other than a story is indeed being written. I’d be very surprised not to. I’m not blowing my own trumpet. Forget about the music. Just the movie itself I thought was a fantastically imaginative and creative piece of work.”

Any sequel to the film -- which starred Guardians of the Galaxy's John C. Reilly alongside Sarah Silverman, Jack McBrayer and Jane Lynch -- will likely wait until at least 2017 since Disney Animation has Zootopia slated for 2016.

Wreck-It Ralph Sequel in the Works