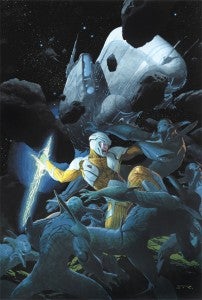 Robert Venditti, creator of The Surrogates, has recently been tapped by the revitalized Valiant Comics to write X-O Manowar with artist Cary Nord. The first issue hits just before the release of Valiant's Free Comic Book Day special in May and will be the first new #1 from Valiant since the company folded almost ten years ago.

We caught up with Venditti to discuss revitalizing the Valiant line, what to expect from X-O Manowar and the weird coincidence of X-O Manowar coming back to light at the same time as similar concepts like Image's Prophet and the upcoming John Carter movie. Throughout the story, check out a sneak peek of X-O Manowar's first issue. Being the launch title for the new Valiant Universe, how much pressure did you feel to get some world-building out of the way and help establish a tone and a feel for the world readers are going to be finding their way around? I'm a highly organized writer, so before I start scripting any story-even my creator-owned projects-I spend time building the world the story will take place in. Finding ways to tie in X-O Manowar with the rest of the Valiant Universe is one of the aspects of this book that I'm having the most fun with. There are so many great characters in the Valiant stable, both heroes and villains, 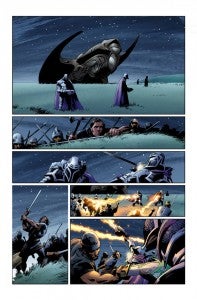 and I can't wait to get me hands on them. What do you think readers have to know going into this title? They don't have to know anything. Longtime fans will find a lot of familiar elements in the new series-Aric of Dacia is still a 5th Century Visigoth who comes into possession of the universe's most powerful weapon and brings it to the modern day-but we aren't picking up where the last issue of X-O Manowar left off. This is a first issue in every sense of the word, so it's a jumping-on point for everyone. "Conan in Space" is how X-O Manowar has been described by some other stories I've seen written about your book. At the moment, though, the estimable Brian Wood is working on Conan, Brandon Graham and Simon Roy are killing it with a sci-fi barbarian take on Prophet and John Carter is as big as ever. Is it discouraging when your idea suddenly becomes something that's in the water, or does that just tell you that there's interest in the concepts? If I understand those other books correctly, they all, like X-O Manowar, consist of new takes on preexisting material. So these are ideas that have been in the water for decades. As far as them all coming back at the same moment, I've found it's 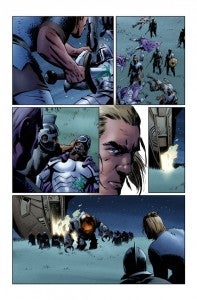 a pretty common occurrence. For whatever reason, ideas just seem to have their time. That's how you end up with Sleep Dealer, Avatar, and Surrogates all in theatres within a few months of each other. How did you get picked for this gig? Did they approach you or did you pitch it? A little of both. Valiant Executive Editor Warren Simons approached me about writing for their line, and I was immediately excited about the prospect. It isn't often that you get the chance to not only relaunch a character, but help shape an entire universe. I had to pitch my way into the job, though, so I spent some time researching Valiant's characters. X-O Manowar leapt out at me as a character with a compelling core concept, and I spent a few weeks putting together my vision for the series. Happily, Warren liked what I came up with. I'm having a great time with it. It's a different format from the original graphic novels I'm accustomed to writing, but the challenge of new things is what keeps writing fun. And if you want to learn your way around monthly comics, who better to learn from then Warren?Now that you're a little into it, how does working on a monthly schedule suit you? Creator-owned books are really another animal entirely. 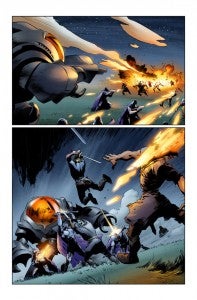 Is there something satisfying about working on a title that has a lot of history and a lot of fan goodwill, but where you aren't necessarily trying to fit in with anyone's past stories or being compared to some great creator who's closely associated with it? It seems like a great middle ground.

Reading the list of past creators who've worked on X-O Manowar, there are ton of really amazing writers. I don't find that intimidating, though. I look at it more as an honor-I'm getting to follow in the footsteps of people who are highly regarded in the industry. It seems as though a lot of people are familiar with the basic concept of X-O Manowar, and are comfortable with the character, but that's about it. Will you be using his old supporting cast and villains, or creating new ones, or a little of each? Definitely both. There's so much good material in the original run, I'd be crazy not to capitalize on it. Having said that, there are plenty of new elements we'll be introducing as well, not the least of which is The Vine, the alien race who abducts Aric in the 5th Century. They'll play a huge role in the pages of X-O Manowar, and maybe throughout the rest of the Valiant Universe, too.