In another example of comics culture coming to the big screen, more and more massive, tentpole-style movies are beginning to build universes...including just about every comic book movie you can think of. 20th Century Fox is assuring fans that the new Fantastic Four movie will jive nicely with their existing X-Men family of films, while Marvel is deep into its cinematic universe and more independent films like Iron Man 3 and Guardians of the Galaxy have people out there promising, "No, no, this all ties in." It feels a bit like regular, monthly superhero comics, and that's surely by design. One of the things about regular, monthly superhero comics is that there aren't a lot of regular readers who consistently buy only what they want and enjoy. Almost everyone will get suckered into buying some unwanted tie-in featuring a character they don't care about. Many comic book fans remain subscribed to books they hate for months or years. Why? Because "it matters." The soap opera of continuity and the interwoven nature of the stories make every issue important, even the sucky ones, and since the most popular characters are the most impacted, hundreds of thousands of Batman and Wolverine fans have to decide whether they're willing to read between the lines to make the overarching story work or if they want to buy that extra book they never wanted. Now, the hundreds of people who work on major motion pictures actually do care about the product they're releasing. Just like in comics, the odds that any given creator is saying, "To heck with it. I'll mail it in and they'll buy anyway" is slim to none. What they are willing to do, though, is plan and market around the phenomenon and take advantage of the continuity-obsessed fan. To be a comics publisher or a movie studio, after all, you pretty much have to assume that every movie or comic book you're coming out with is the best it can be. That means your job becomes marketing it, and an effective way to market for comics, they've proven for years, is to tie them into other comics. What started out as a cool thing to do every so often has become the status quo in just about every major comic book series, and publishers enjoy the benefits of habitual readers who say, "Well, I don't care about Batwing, but now that it's been moved out of Africa and into Gotham I'll buy it since I get the rest of the Gotham books." (That's coming from a Batwing reader and a big fan of the creators, so take that at face value and understand I'm talking in a larger context, OK?) More and more, the expectation for any big franchise movie is to make a ton of money, spin off sequels and sell a bunch of ancillary stuff like t-shirts and lunchboxes. When it takes a filmmaker three years to make a sequel to one of these monsters, the question becomes how the characters and properties stay relevant in between. But the Marvel movies have taken cameos and team-ups to an art form and Star Wars is planning a movie a year for God knows how long once 2015 rolls around. Some of those movies won't even be direct sequels ("Episodes"), but spinoffs focusing on solo characters.  But people will go, because Star Wars. And it makes sense. Look at J.J. Abrams's other big sci-fi franchise for a little assistance understanding why this is tempting. A major filmmaker like Abrams (or Christopher Nolan for that matter) can essentially pull TV off the table, meaning that the four years it took him to get Star Trek Into Darkness into the theater was dead time in terms of developing the franchise. 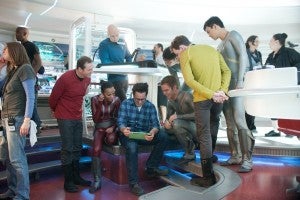 For years, the Star Trek franchise was able to roll along with its moderate-sized, fiercely loyal group of fans. In recent years, though, the Abrams reboot has focused largely on bringing in new viewers who wouldn't ordinarily consider themselves Star Trek fans. That's reflective of a change in Hollywood's culture; it used to be about whether you made enough money to pay for your movie and turn a tidy profit for the studio. Now it's about trying to capture the truly massive box office that a couple of movies a year manage to get, and building a franchise that guarantees your sequels and spinoffs do the same. That goal was always there, of course. But more and more it's the primary objective, rather than an added bonus. Modern fandom have been spoiled; we live in an era of continuity-crazed fans who have been following the antics of their favorite characters, largely unchanged, for decades. Abrams's Star Trek reboot, The New 52...these are things that shake the status quo up a bit, and that can really upset the people who are emotionally invested in what's been there for years. Blaming the fans, of course, is a little silly when you consider that these universes and continuities are crafted for the express purpose of keeping the longtime reader hooked and making them buy more and more stuff even as it's less and less related to their originally-stated interests. Ironically, while Abrams and Nolan have fought it in the past, connecting TV with the movies is the big one; a blockbuster movie can make around $300 million at the theaters; that means it's been seen by somewhere in the neighborhood of 30 million people (we're just ballparking here). And that's a truly massive hit. So far in 2013, only two movies have generated $300 million or more at the domestic box office. But an episode of The Walking Dead can catch upwards of 10 million viewers--and that's on its first showing. Plus, as the show averages something like 9 million viewers, it's safe to assume that over the course of a 13-episode season it will probably have a wider reach than 30 million people. Marvel, meanwhile, will trot out a spacefaring movie about a bunch of superheroes nobody much has ever heard of next year...and it will be perceived as the next installment in The Avengers franchise because Thanos will be in it. Want to know what's going on in Avengers 2 before it gets too confusing? Check out Guardians of the Galaxy! Ch-ching.