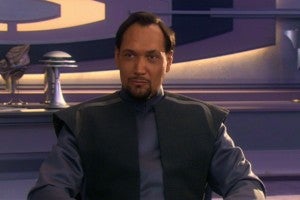 During a Sons of Anarchy conference call earlier this week, actor Jimmy Smits was peppered with questions about Star Wars Episode VII and beyond. From the report at Spinoff Online, it appears the onetime West Wing President took it with good humor. "My character was gone after episode whatever. If they want to call, let them call," Smits is quoted as saying, which may sound a bit standoffish, but after that he went on to reminisce about some of his experiences with the Star Wars films, and it seemed as though he had some fond memories. While Bail Organa, the adoptive father of Luke and Leia and the one who split the twins up between Episode III and Episode IV, has long been presumed dead following the destruction of his home planet of Alderaan, they never specifically addressed his fate onscreen so it's not impossible he could pop up if the story called for it. "There's more stories to tell, of course, I think," the actor said of the Star Wars universe. "You look at the 007 franchise and it's going on for [50] years. I mean, there are a lot of people that grew up watching that, so I know that he didn't pass that on without a lot of caveats. I think there will be involvement with George down the line." He also recounted his first meeting with George Lucas, in which the filmmaker addressed what's--let's face it--probably most actors's first question upon being invited into the Star Wars universe. Smits said, "When I first had my first conversation with George, it was like, 'He's going to talk to you, he's going to call you on the phone, and you'll talk to him,' so the conversation was kind of like, 'I really like your work, and I've watched you before and I'd like you to join our family, but this conversation is not going to continue unless you are cool with the fact that there will not be a lightsaber involved in the conversation.' So that's the way we started that."