Warning: Spoilers ahead for tonight's season finale of AMC's The Walking Dead, titled "A."

The most potentially-controversial scene in The Walking Dead's history aired tonight (for the second time in three weeks, yes) -- one that even star Andrew Lincoln expressed reservations about. Of course, Lincoln admitted in Talking Dead tonight that he had no idea the scene was lifted almost completely from the comic book source material by Robert Kirkman and Charlie Adlard. How closely were the two taken? Well, check it out: The scene starts with "you f---ed up" in the comics, and the more TV-friendly "you screwed up" in "A." Of course, in the TV series, they were talking to Rick, whom they blame for the death of Lou (the Marauder he had to strangle in order to escape in "Claimed," and then left on the bathroom floor to reanimate and distract the rest of the group). In the comics, they were talking to Abraham. As a refresher for TV-only viewers, Abraham's introdution to the group was a bit earlier and went a little differently in the comics. During this sequence, the group was intact but Rick, Carl and Abraham were going on an overnight supply run to Rick's hometown, so that he could raid the armory and such. Some of that happened in "Clear," the episode where Rick, Carl and Michonne returned to Cynthiana (the hometown), met up with Morgan and took most of his armory to face off against The Governor in Season Three. Some of those same guns, come to think of it, are probably the ones currently in a gym bag not far from Terminus. But that's getting way ahead of myself. Anyway, in The Walking Dead #57, Marauders (here an unnamed group of street toughs who manage to catch Abraham off-guard, not anyone with a legitimate beef against Rick...and certainly not anybody we've spent a few issues following like we did with the Claimers) sneak up on the El Camino where Rick and Carl are sleeping while Abraham keeps watch. 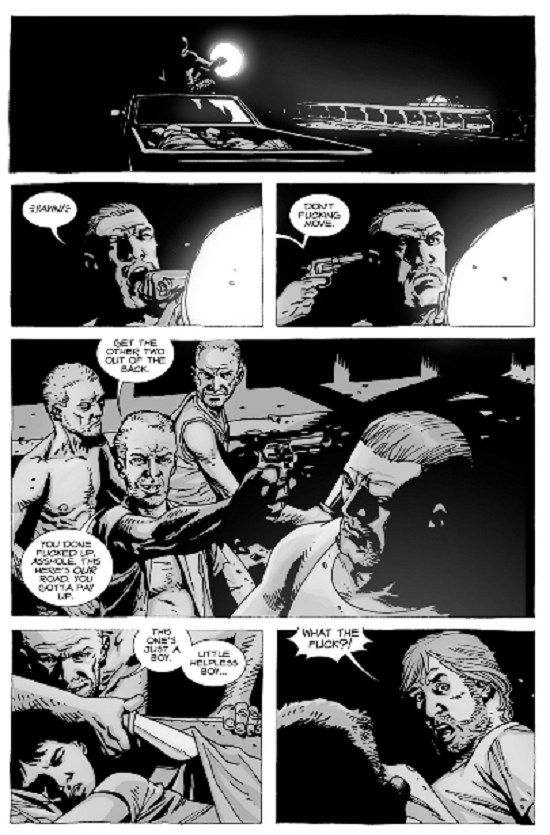 As in the comics, it starts with (a variation on) that line and a gun to somebody's head. There's a man with a knife ogling Carl, too... 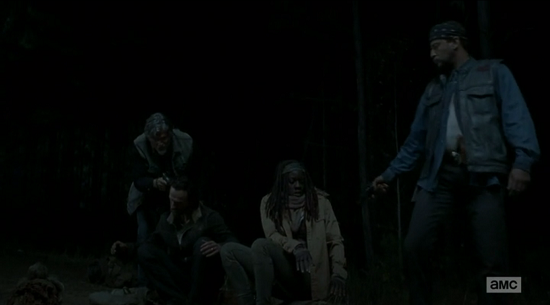 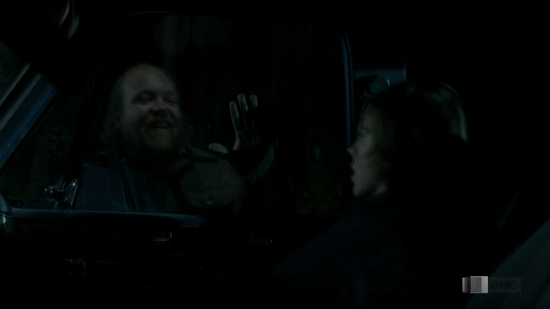 It strikes me that last season, Carl was very much growing into his manhood as Chandler Riggs grew like a week and approached puberty. They infantilized him a little bit in "After," likely in order to sell him as helpless here while the adults did all the heavy lifting. In the comics, Carl is younger (about 10) and didn't need any help being a kid you feel scared and sorry for. There are five Claimers here, while there were only three Marauders in the comics. That doesn't make the odds any more impossible here, though; Daryl joins the fray on Rick's side and more or less makes the math about the same. He also provides a distraction that allows Rick a few moments to ramp up. And once they're trying to "teach him all the way," that's three on three again, with Dan too preoccupied trying to rape Carl to really make a difference in the fight. Meanwhile, the "you'll get yours -- just wait your turn" that's directed at Abraham in the comics goes to Michonne in the TV series. The guy with the gun in Abraham's face is blocked out just about in the same spot as Tony, who was holding a gun on Michonne. Rick, in both media, kicks off the "fighting back" portion of the evening by head-butting the guy behind him in the nose and causing him to mementarily lose it, then seizing on that opportunity to start a fight. 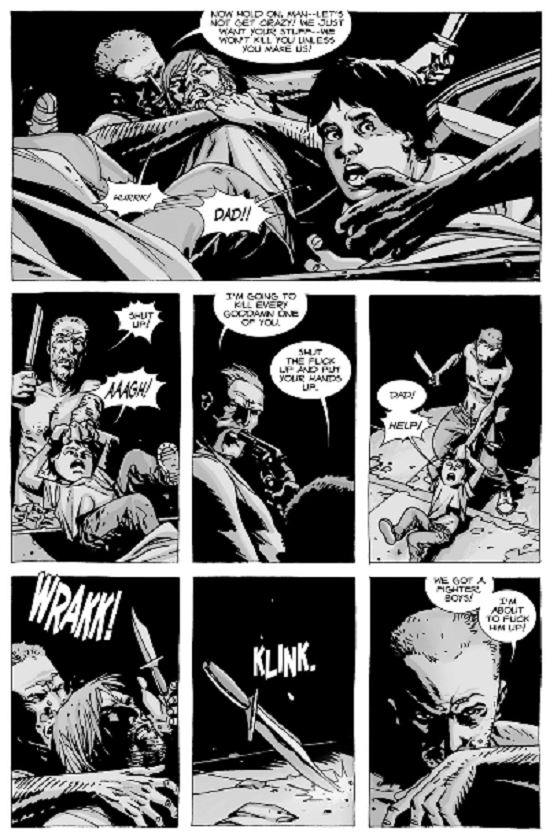 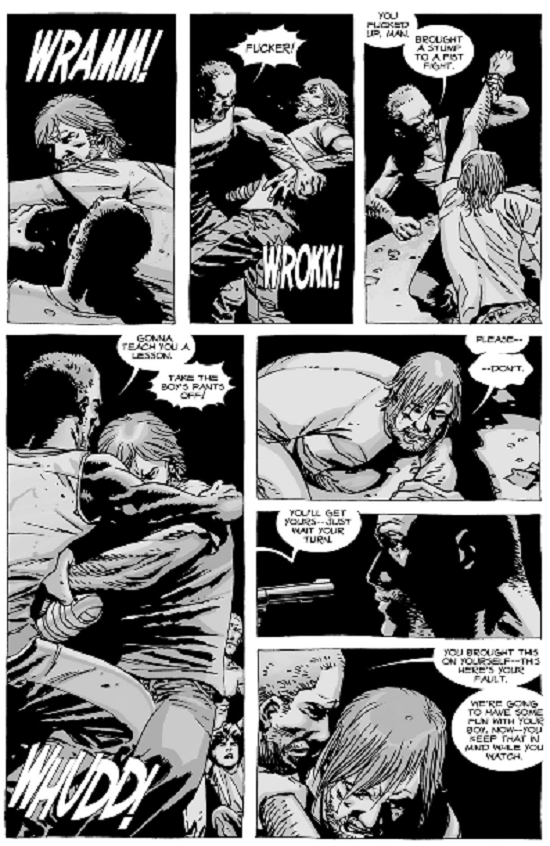 While the Marauders say that they're going to rape Carl as retaliation for Rick fighting back, the Claimers make no such claim; Len's intimation about "the little'uns" last week clinched that this scene would happen basically this way in the mind of many fans. Joe suggests it's retaliatory for Lou's murder, but it's not because he fought back tonight, just because they don't like him. It's also worth a mention that while Joe has seemed like a charismatic, reasonable fellow for most of his life on the series and not particularly off the wall, he giggles with glee after announcing that he plans to kill Rick and Daryl and rape Michonne and Carl.  This brings him more into line with the Marauders, who seem to be enjoying every minute of this until it's no longer going their way. Dan, meanwhile, is laughing and telling Carl not to squirm, but that's basically line for line from the comic. 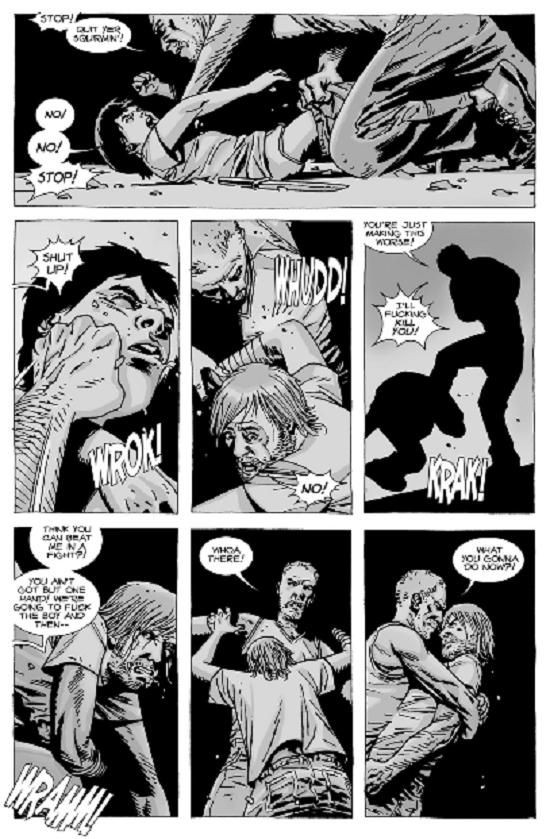 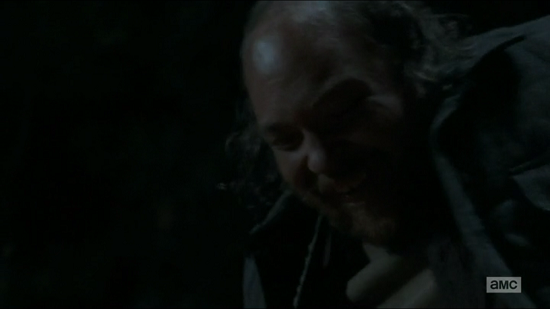 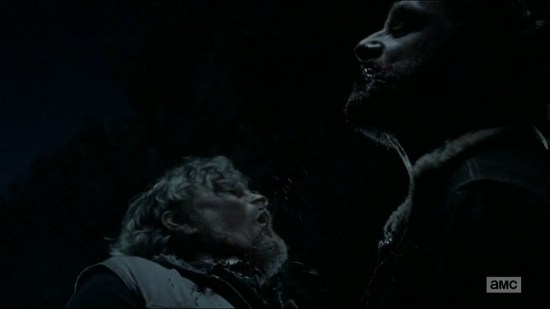 From there, it unfolds quickly, brutally...and almost exactly like the comic (except of course that Daryl takes out one of his assailants and Michonne manages the other with the same gun she uses to kill Tony). In the comics, it's basically just Rick 1, Abraham 1, then the rapist. In both media, though, Rick growls that the man is "mine," although on TV that has extra weight to it since the Claimers have been...well, calling dibs on everything...since the moment we saw them. 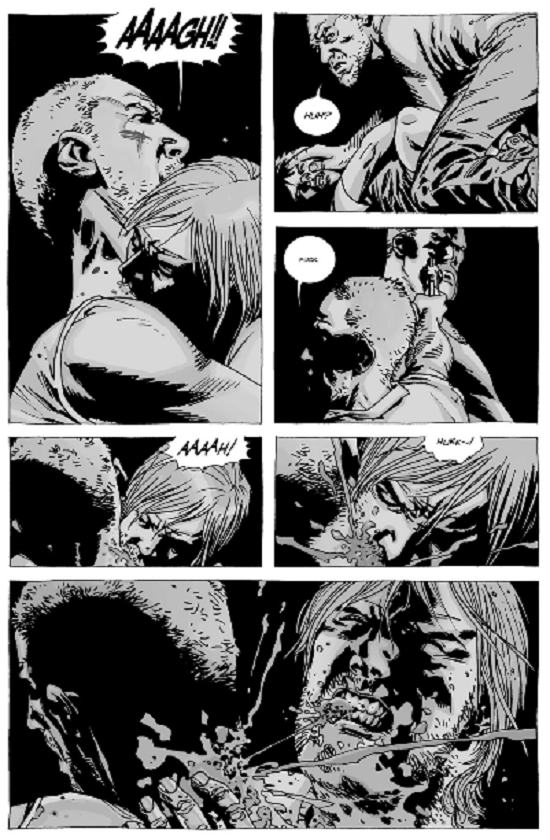 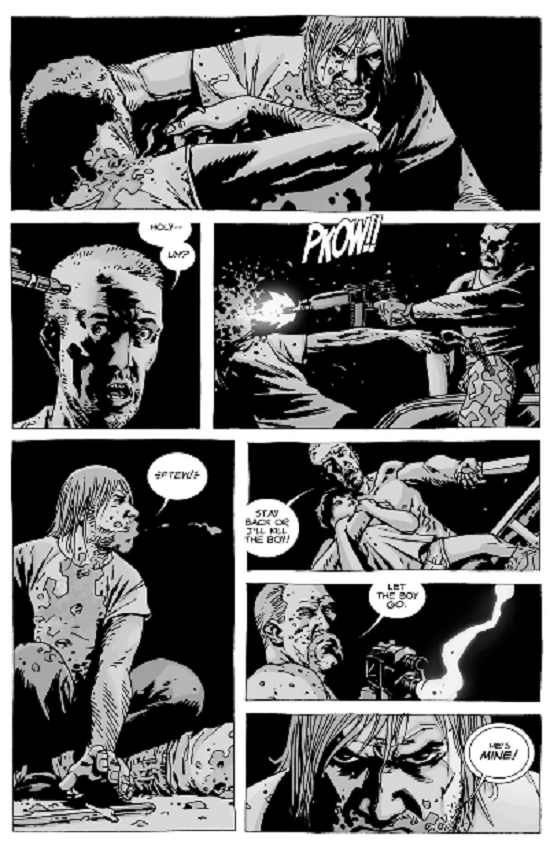 The Marauder who ran for his life got almost the identical treatment in the comics that he did on TV...and you can see Carl's head being cradled while it happens in both media, too (although by Abraham versus Michonne). 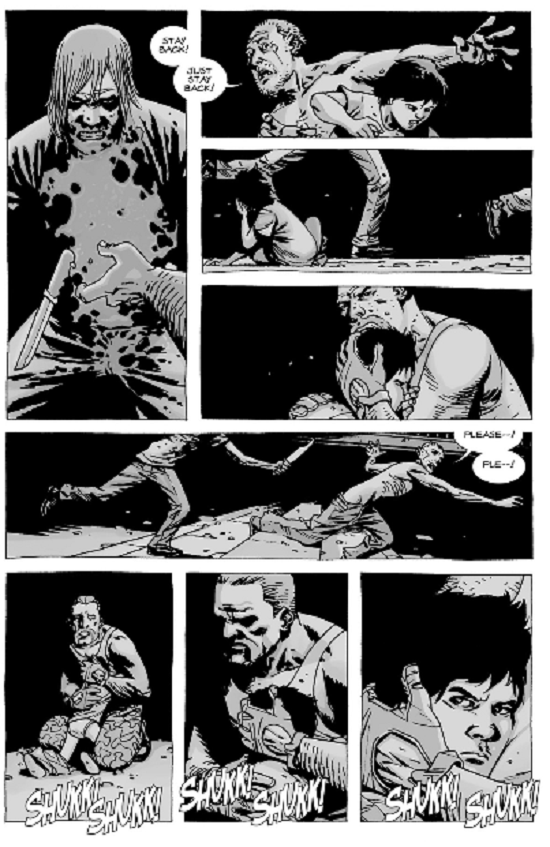 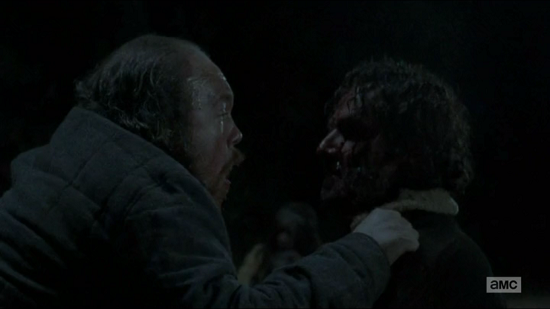 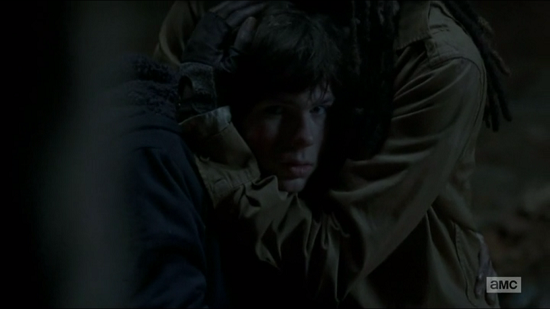 The Walking Dead's Most Shocking Scene: Comics to Screen Comparison