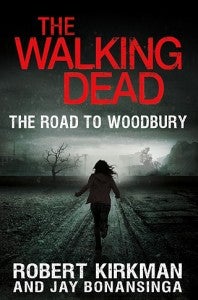 In an interview yesterday, The Walking Dead creator Robert Kirkman told Entertainment Weekly that there will be at least one more prose novel set in the world of The Walking Dead by himself and his Road to Woodbury collaborator Jay Bonansinga. "The second novel progresses the Governor's timeline a lot more and is getting you closer and closer to the events that occurred in the comic book series," said Kirkman. "And so some of the events in the comic book series are actually going to appear in the third novel. The third novel is going to be a whole new story but you're actually going to get to see Rick Grimes and Michonne and some of the other characters, which you haven't seen in the novel series thus far. So I'm pretty excited about the third novel. But I'm not as excited about that as I am the second novel, which everyone should rush out and buy!" While The Governor is to some extent the hero of the novels (which jives with David Morrissey's comments on the more sympathetic--or at least balanced--way the character is portrayed on TV), Kirkman says that he does his best to reconcile that version of the man with the purely evil version fans have already seen in the comics. "There were little snippets and little notes that I kept in mind when I was writing the comic book that I am expanding and twisting and turning as we work on this novel series. I'm very meticulous in working with Jay that every single thing which happens in this novel series is completely canon and dovetails into what you already know in the comic books perfectly. But, yeah, there is some actual writing going on! I'm not just going off of notes I wrote 10 years ago."