Being a Power Ranger is far from a game, and there will be dire consequences if the team can't get on the same page.

Light spoilers incoming for Saban's Go Go Power Rangers #5, so if you haven't read it yet you've been warned.

Go Go Power Rangers continues to focus on the growing pains of being a Power Ranger and succeeds in revealing new layers to these established characters. That goes tenfold for Jason, as fans start to see the metamorphosis from student to leader and the necessary change to his friendships that it requires.

Writer Ryan Parrott doesn't just focus on Jason though, teasing new layers to Rita Repulsa through flashbacks. Parrott has given Rita some added credibility during his time with the character, and that only continues here. 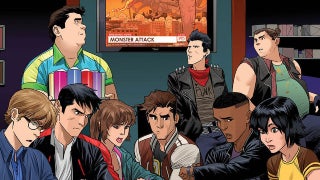 Parrott's biggest achievement though so far is credible stakes. It's easy to get lost in the over the top powers and Zords, both for the reader and the Rangers. Despite the Rangers themselves being unaware of Matt's plight, Parrott establishes significant tension, providing the reader tangible consequences to the Rangers overall lack of preparedness later in the issue. This isn't a game, and it's time for the Rangers to stop treating it like one.

While Jason is one of the issue's strong points, he is also the source of one particular critique. At one point it can seem as if Jason's snapped without any proper reasoning behind it. Sure he's frustrated with the team a bit but his reaction doesn't seem proportionate to what they did. Over the course of several issues though Parrot has slowly built Jason up as proactive rather than reactive, essentially making him the Batman of the group, pushing so they don't get flatfooted.

It makes sense when you consider his overall arc, but it could also be seen as over-reactive or even hot headed to go from A to B within the course of one issue like that. It doesn't take away from the overall point of his actions but does merit mentioning.

On the visual front, can we just say that any time Dan Mora and Raul Angulo want to draw DinoZords you can count us in. Seeing the Zords scrimmage against each other was one of the book's many highlights, and that is in large part thanks to the art. This book as a whole is delightfully stylish, as Mora and Angulo embrace the bright color palette and fantastical designs without going overboard. The stakes still feel real despite the cartoon quality of the visuals, and Rita appears as the force of nature she should've always been.

Go Go Power Rangers continues to find new layers to explore, and Parrott has found a nice balance between their social lives and their lives as Rangers. There's a great deal of potential with this current storyline, so here's hoping the landing is as entertaining as the journey.

"As the Putty Infiltrator shifts between teachers, parents, and friends, the Rangers have to question who they can trust-if they can trust anyone at all."