If your Power Rangers collection needs an injection of pizzazz, then artist Derek Laufman has the perfect solution.

Laufman has been drawing for over 18 years and has worked with Marvel, Warner Bros., Hasbro, and Mattel just to name a few. He's even created his own comic called RuinWorld, but he's also managed to create some amazing Power Rangers art, giving each Mighty Morphin Ranger their chance to shine.

His Chibi illustrations are the perfect compliment to the bright and colorful world of Power Rangers, and any fan would love to have one of these art prints on their wall. While his renditions of the Rangers are admittedly adorable, each Ranger still has that "I will beat you down if you cross me" vibe, and it's perfect. 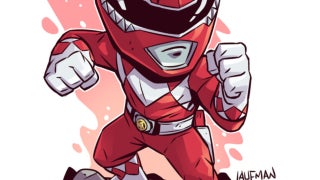 It also makes you wish there were other Rangers. The Power Rangers In Space lineup would look incredible in this style, as would the Ninja Steel Rangers or the Time Force Rangers. Here's hoping that the lie doesn't stop with just Mighty Morphin.

A bonus is that the prints are relatively cheap, costing only $10 a pop, so if you've been looking for a cool Christmas present that doesn't break the bank, it seems you now have struck gold.

As we mentioned before. Laufman also created a comic series called RuinWorld, and you can read more of the fantasy series here, which focuses on two treasure hunters after they steal a cursed treasure chest.