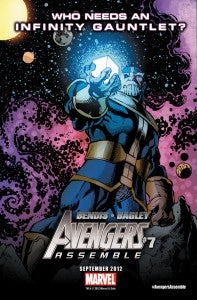 Marvel has just released a teaser for Avengers Assemble #7 by Brian Michael Bendis and Mark Bagley, which sees the Avengers and the Guardians of the Galaxy continuing to face off against Thanos, who now wields the Cosmic Cube in the story. If this sounds like it could turn into a Hollywood thing, you're right--with the announcement of the Guardians of the Galaxy--who have plenty of connections to Thanos--being developed as a feature film by Marvel Studios, it seemed clear that fans that their story would intersect with the planned Avengers sequel, which will presumably see the team facing off against the Mad Titan. Of course, it's unlikely Thanos will use the Cosmic Cube in Avengers 2; after all, his lackey Loki (say THAT five times fast, fanboy!) just tried that in The Avengers (they called it "The Tesseract" in the movie, natch). But as an entry point for fans of the Marvel Cinematic Universe, that cover is pretty much perfect, isn't it? Or, as the publisher says,

With the Mad Titan, Thanos, out of the reach from Earth's Mightiest – his quest for power and domination over the Marvel Universe continues in Avengers Assemble #7! But the Avengers won't go down without a fight, and courtesy of Brian Michael Bendis and Mark Bagley, they're bringing the Guardians of the Galaxy with them! But can even their combined strength defeat Thanos with a cosmic cube in his possession? Find out in Avengers Assemble #7, hitting comic shops everywhere, the Marvel Comics app, and Marvel Digital Comic Shop this September. AVENGERS ASSEMBLE #7 (JUL120551) Written by BRIAN MICHAEL BENDIS Pencils and Cover by MARK BAGLEY FOC – 8/20/2012, On Sale – 9/12/2012

Avengers Assemble Against Thanos and The Tesseract