Marvel fans have been eager to see the (anti-)hero that started the 2000s wave of superhero films make his return - and ever since Marvel Studios reacquired the rights to Blade, we've just been waiting to get two much-needed answers: Who will play the new Blade? And how will the character fit into the Marvel Cinematic Universe? The latter is a bigger question, but there's been a lot of fan art dedicated to the former - including this:


Our friend BossLogic did this markup of Star Wars: The Last Jedi and Pacific Rim 2 star John Boyega, looking every bit like the Blade character we know and love. It makes a pretty compelling case for why the actor would be great in the role - though there is some stiff competition in this particular fan casting arena; other recent Blade fan art has included the likes of Jamie Foxx.

It's also pretty amusing that BossLogic's post includes mention of the fact that any Blade casting would only happen at the behest of Wesley Snipes. Snipes has recently said that he'd be open to playing Blade again, and even smacked down the idea of recasting the character, in a recent social media post.

While it would be great to see the classic Blade back on the big screen, it's probably better for the MCU if we get to explore a new version of the character. Snipes... doesn't quite look the same as he used to, and the next Blade project would arguably be a Netflix series, rather than another film. If nothing else, mixing old movie continuity with the MCU doesn't seem like an idea that's ever going to be in the cards, Blade will definitely need a makeover. 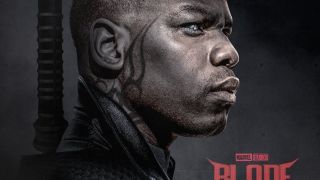 Who do you think could play Blade in a new MCU film series? How about a TV series? Let us know in the comments! And be sure to check out more of BossLogic's work, above!

Here's What John Boyega Could Look like as Marvel's Blade