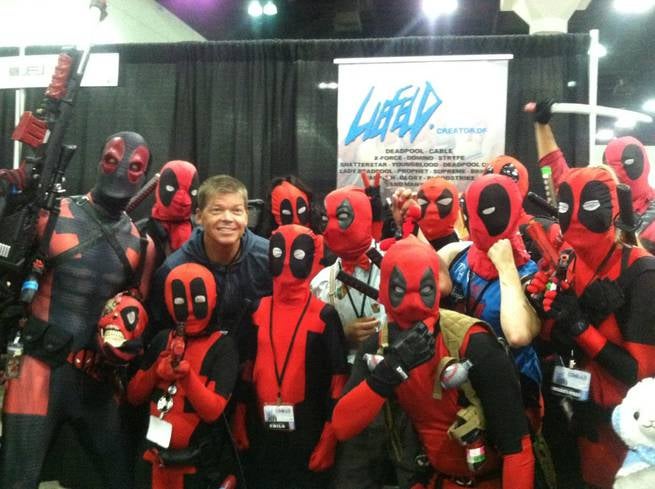 It's Wade's World, and we're all just living in it. Since the Deadpool movie was first announced, there's been no shortage of exciting Deadpool news. Between the first look at test footage, Ryan Reynolds' costume reveal, and the most recent announcement of the movie receiving an R rating, it's clear that fans have craved a live action version of the Merc with a Mouth more than a Chimichanga. But really, Deadpool's rise was a phenomenon just waiting to strike.

Let's set a scene. It's 1991, and comics are on the verge of exploding in the direct market. At the same time, a young, red-hot artist, Rob Liefeld, is about to make his mark on history with a new anti-hero nobody saw coming. The crimson character was Deadpool, and in a single issue he forever changed superhero storytelling.

I've had the pleasure of speaking with Rob Liefeld several times about his rise in the comics industry. It's nothing short of inspiring, which is what makes him the perfect candidate to launch a new column here at ComicBook.com. We're speaking to creators about the characters they've created and Liefeld is our first.

When you created Deadpool - what was your goal for the character?

So, long time fans know that prior to Deadpool, I introduced a character in the New Mutants named Cable, whose presence boosted the book to the top of the sales charts and turned New Mutants around. Our sales quadrupled and Cable was very popular. I was trying to duplicate what I had done with Cable and introduce another significant cast member to the book. When Deadpool entered the issue and took down the entire team of formidable fan-favorite characters, only to be felled himself at the hand of Domino, it was supposed to register a reaction. That reaction was, "Hey, this guy is a bad ass, but he is so arrogant that he dropped his guard and was taken down by Domino/Vanessa with a knife in his back." In his first appearance [New Mutants #98], he had implied a history with Cable. I was trying to tether him to Cable the way I tethered Cable to Wolverine. That was the goal. That was my "formula for success" at 22 years old.

In your mind, what makes Deadpool, Deadpool?

I've thought a lot about this, and in my estimation it's 3 components. 1. His big mouth. He's a smart ass along the lines of the Spider Man of my youth. 2. His look. His costume is ridiculously important. And lastly, the character's weapons/action aspect. I see and hear all the time, "Could Deadpool take this guy, or that guy?" All three of those factors formed a powerful combination.

The character has been adapted for many different media, including video games, cartoons, and more. What do you think those takes get right, and what might have you done a bit differently?

Look, I love them all, I really do. The cartoons, video games, the toys, merchandise. It's a blast. I don't analyze them with a critical eye as much as you think. There are so many variations. Mostly, I'm grateful they exist at all.

On that note, what characteristics of the character do you think resonates with audiences?

Now, this is fascinating because when the Deadpool footage that dropped last summer and had him entirely in costume, we all celebrated it. But 8 months later, it's like here we go again... " He's in costume!!!" People love his look. I've said before that Deadpool is like Boba Fett in that he was instantly popular on arrival. Both characters arrived as a visual first, with some mystery. But you first saw them—boom, instant love. The mail following Deadpool's first appearance was overwhelming. He was in every other issue, if not every issue after he first appeared. The fans have always been in Deadpool's corner. His look, plus his attitude, creates a powerful connection. Look at the row of action figures and statues I have on display, each posed in a striking action gesture with guns and swords. They're not talking, but man do they look cool. There's never a shortage of Deadpool action figures and statues. One of his action figures in 2010 was the number one toy of 2014. He's just a powerful visual, and that fact is further supported by the massive cosplay presence I encounter every convention I go to. Over the last several years, there's far more Deadpool's on the show floor than any other character—except maybe Stormtroopers. 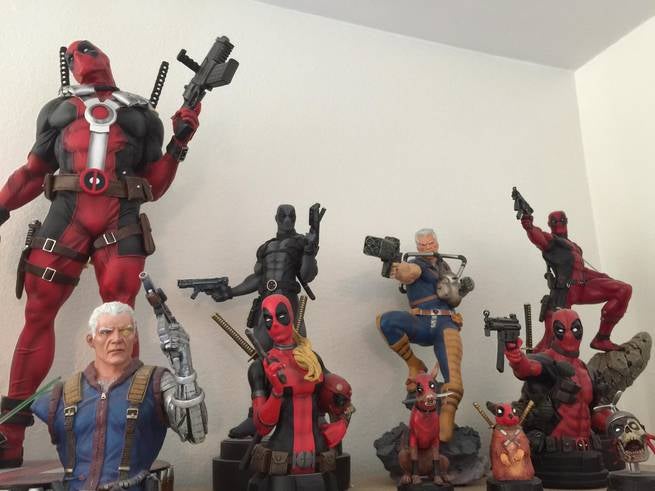 From a purely design standpoint, what do you think makes the costume you created so iconic?

Black and Red is a great combination. Plus the full face mask has always been a winner. Beyond the obvious Spider-Man influence, there are other characters, ironically in the Spider-Man family, like The Prowler. I believe in putting it all out there, and the Spidey look, one of the best character designs ever, was always influential. I threw some pouches, guns, and swords into the mix, and it seemed to have worked.

Was Wade's sense of humor something you modeled off your own?

I'm a total smart ass, always have been. But, so is Fabian Nicieza, and he provided the dialogue and the snappy patter that established the tone for everything followed. Period, end of story. 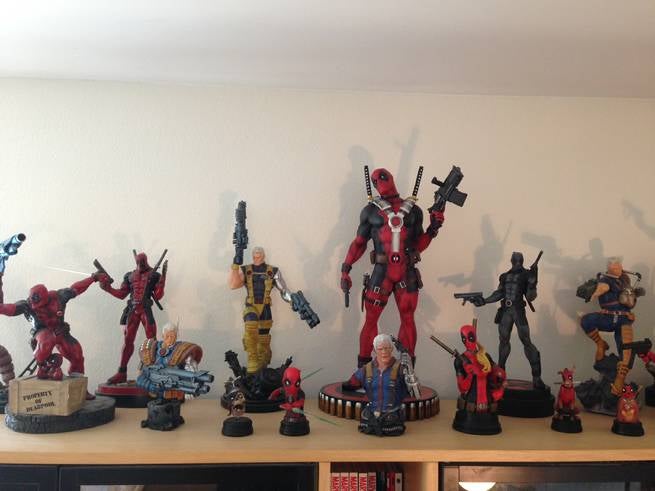 You've mentioned Wade's fighting ability a few times now. He comes to the party with guns, katanas, and and excels at hand-to-hand combat. Does he prefer one over the other? When you created him, where did you see him learning all of these skills?

Soldier of Fortune. He submits to the Weapon X program and is transformed but messed up horribly in the process. He's the Danny Devito to Arnold Schwarzenegger's Wolverine: one is perfected, one is the "junk".

Do you have a favorite Deadpool story?

Yes, a short story from Deadpool #900 written by Fred Van Lente with incredible storytelling and art by Dalibor Talajic. It's a silent story where Deadpool battles these criminal mimes. It's always nearby, wonderfully choreographed and violent! 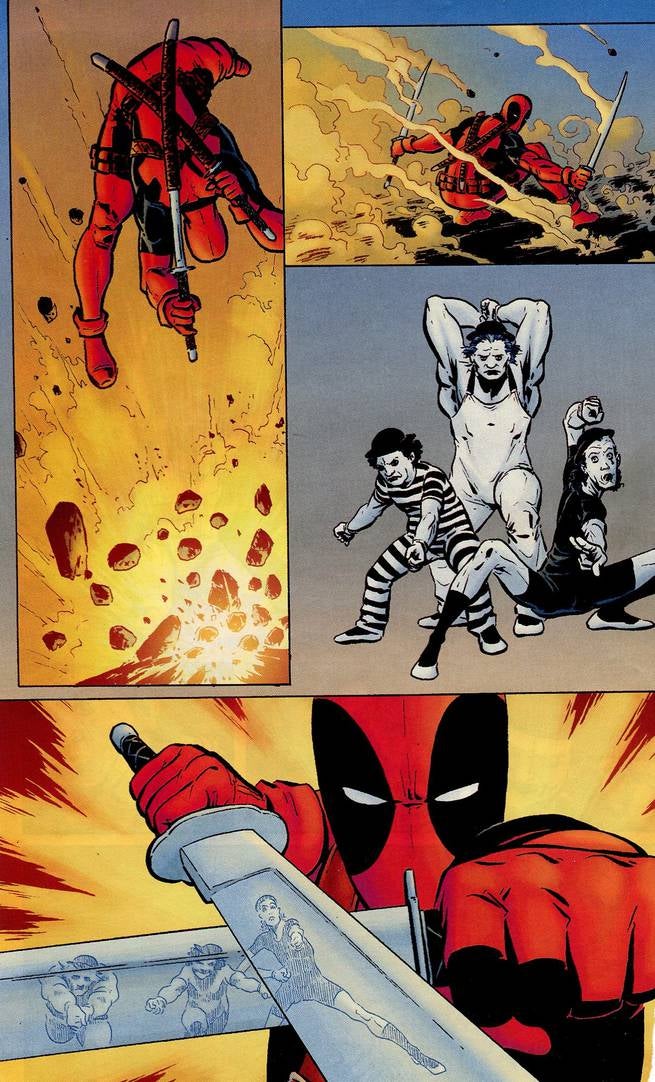 Lastly, while I know you can't talk much about the movie just yet, but you've been involved in this process longer than anyone involved. Can fans expect a kick ass Deadpool film that's faithful to his origins?

I'm telling you with great conviction, and great anticipation for the satisfaction everyone is going to experience, that the Deadpool film is tremendous. It's tremendous fun. It has everything. In the same manner that Robert Downey Jr. co-opted Tony Stark/Iron Man and now seems to "own" him in that way that you can't imagine Iron Man without him, that's what will happen with Ryan Reynolds and Deadpool. The Tony Stark I grew up with wasn't as snappy and as quippy as Downey Jr. made him, but now I only think of his performance. That is what is going to happen here with Ryan and Deadpool. You can see it happening already. It's a complete ownership of a role that we are all going to rally around. This Deadpool film will establish Deadpool on a global scale. In addition to being brilliantly raucous, crazy, violent, and action packed, the Deadpool film has tremendous heart and soul. Prepare for an experience that you haven't encountered yet.It's new template in the way that Guardians of the Galaxy established a new tone for the franchise. Deadpool will do the same.

So ComicBook.com fans, what do you think? Are you even more excited for Deadpool now? Let us know in the comments below!

Want to see someone else profiled like this? Let us know!