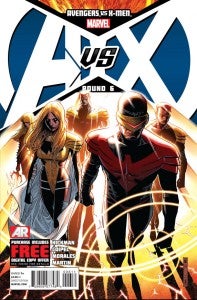 I'm calling it right now--there will eventually be a reference to the group of hosts chosen by The Phoenix in yesterday's Avengers vs. X-Men #5 as "The Phoenix Force," if not a miniseries or attempt at an ongoing, a la the Infinity Watch that sprung forth from The Infinity Gauntlet. At any rate, Marvel Comics has made available a three-page preview of next month's issue, as well as the cover from the issue which was--for obvious reasons--previously kept under wraps. With the status-quo altering events of yesterday's issues in the rear view mirror, how will it affect the rest of the story of Avengers vs. X-Men? And how will the Phoenix Force work, now that it has more than one host? Will it mean a more stable and controlled Phoenix Force or just five people running around, out of control and seething with power? Check out the solicitation text below and the images throughout the story for more. Avengers vs. X-Men #6 goes on sale July 4 (although the U.S. Independence Day holiday may cause late shipments in some areas--consult your retailer). 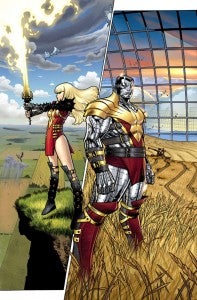 Welcome to Pax Utopia In AVENGERS VS X-MEN #6! The all-powerful Phoenix Force has found not one, but FIVE hosts and in Avengers VS. X-Men #6 – their mission is clear, remake the Marvel Universe in their image. Kicking off the world changing second act of the comic book event of the year, the blockbuster team of Jonathan Hickman and Olivier Coipel show fans just what Pax Utopia looks like through the eyes of Cyclops, Emma Frost, Namor, Colossus & Magik!  How will Earths Mightiest and the other X-Men respond to this new development? And what role will the Scarlet Witch play once she enters the conflict? Find out inAvengers vs. X-Men #6! Here comes the pain as all your favorite super heroes enter 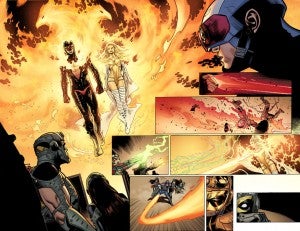 the battle—and only one team will emerge victorious! Don't miss out on this once in a lifetime comic event in, Avengers VS X-Men #6, on sale now in comic shops everywhere, on the Marvel Comics app, and the all-newMarvel Comics Webstore! Which team will reign supreme? Join the conversation on Twitter with #AvX! For more on Avengers VS X-Men, please visit https://avx.marvel.com AVENGERS VS X-MEN #6 (MAY120637) Written by JONATHAN HICKMAN Penciled by OLIVIER COIPEL Cover by JIM CHEUNG Variant covers by NICK BRADSHAW & OLIVIER COIPEL FOC – 6/11/12, On-Sale – 7/4/12

Marvel Previews Avengers Vs. X-Men #6 and the New Phoenix Force