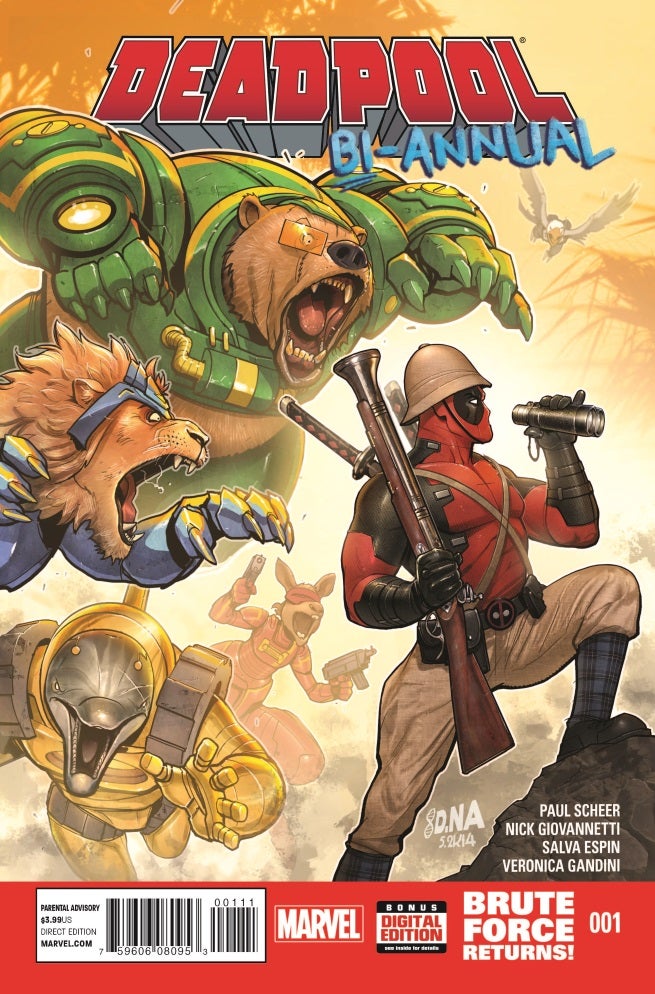 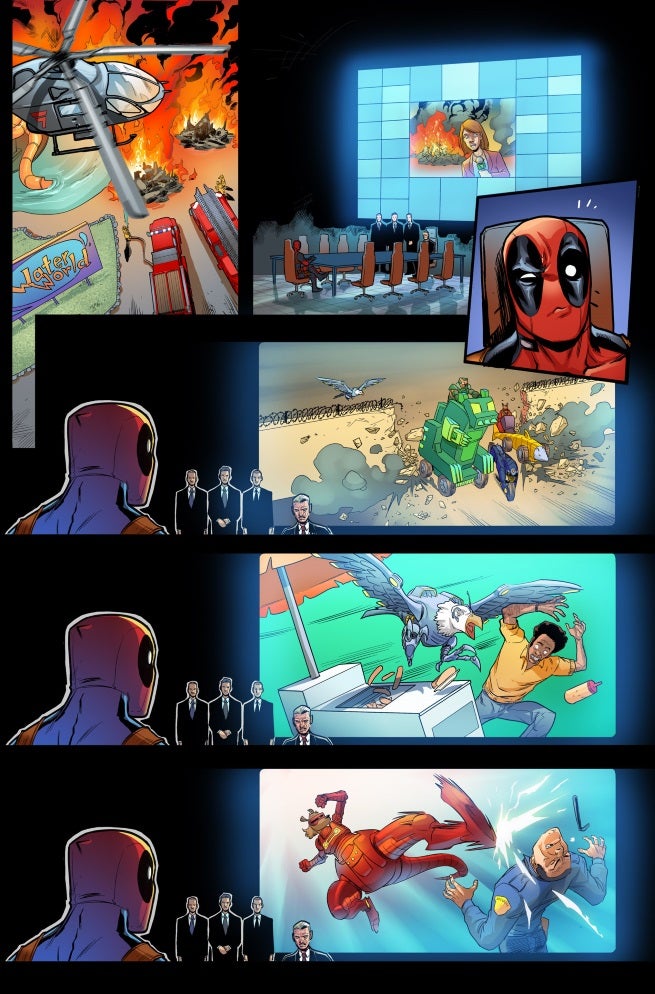 Deadpool is set to have one of his craziest adventures yet in this September Deadpool Bi-Annual #1. The 40-page issues sees the "Merc with a Mouth" taking a contract from an aquatic amusement park called Water World, which entails dealing with a bunch of eco-activists who have been causing trouble for the company. Things get a little more complicated than that when he realizes that said "eco-activists" are actually Brute Force, the Marvel Universe's very own team of cybernetically enhanced humanoid animals.

The issue is written by Paul Scheer and Nick Giovannetti. Scheer is the actor, writer, and comedian known for playing roles like Andre from The League, and for creating the Adult Swim series NTSF:SD:SUV::. Giovannetti is the comedic writer who worked with Scheer previously on the BOOM! Comics series Aliens vs. Parker.

ComicBook.com spoke to both writers about making their Marvel Comics debut, bringing their comedic style to comics, and digging into Marvel's back issue bin to bring back Brute Force.

Fans have learned to expect the unexpected in any Deadpool story. What kind of unexpectedness should they be expecting in the Deadpool Bi-Annual?

Paul Sheer: Just by having Brute Force, a team of heavily armored renegade fighting animals as the main nemesis in this book, that's a pretty heightened start and I think we only go crazier from there.

Nick Giovannetti: Yeah, we really went for it on this one. 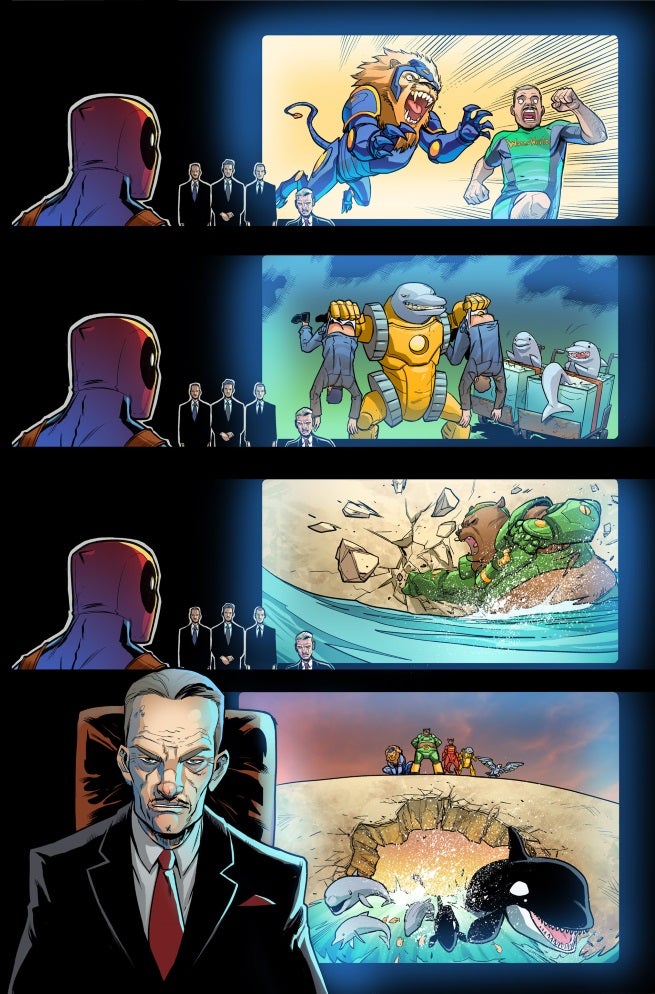 You're making your Marvel writing debuts. Why Deadpool? What it is that draws you to the character, and what is it that you hope to bring to the character in your story?

PS: We owe this all to Gerry Duggan, he served as our "ghost editor"on our Boom! Book, Aliens vs Parker and I think he saw that we could mix comedy and action, the same way that he and Brian do in Deadpool. So with his recommendation and Jordan D. White's guidance, we got this assignment and this is just a dream come true for us. Deadpool is such a fun character and it was perfect to start off with a character that actually makes A LOT of jokes. The only goal we had in making this book was to continue the incredibly high standard of quality that Brian and Gerry have created. If we make them happy with the book, then I feel like it's a victory.

NG: Honoring Brian and Gerry was really it.

Brute Force is a fairly deep cut from Marvel history. Have either or both of you just been itching for the opportunity to bring Brute Force out of retirement, or was their role something you came up with after taking on the project?

NG: Getting to reintroduce Brute Force to the world was a dream I didn't know I had until it fell right in our laps. I'm so thankful to have been given this opportunity. I hope everyone enjoys our take on them. We had a blast writing them. 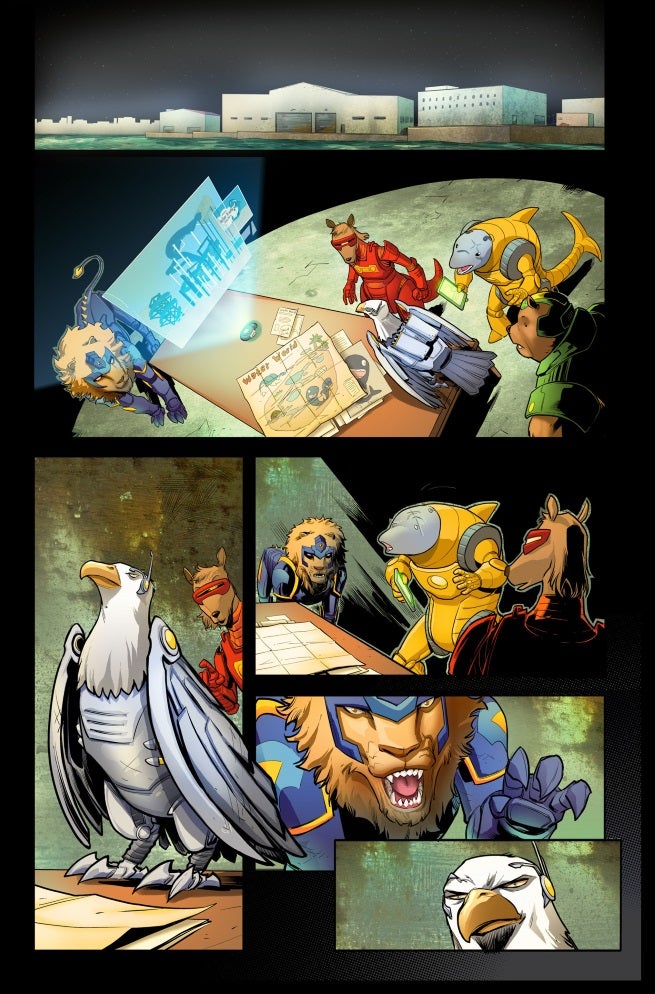 PS: Jordan D. White is the mastermind behind unearthing these creatures. At first we were a tad reticent because it felt like it could potentially backfire on us and be a bit of a one trick pony. But then Nick and I brainstormed on how to modernize and update these guys, we treated them like they were bad asses, like an animal A-Team and that made us really excited to bring them into Deadpool's world.

You both, obviously, have a history in comedy, be it performing live or writing for film and television. How different is that from writing for a comic book script? Does writing for a fictional character who will only appear on a page, rather than a character who will partly be brought to life by an actor's performance, change how you approach writing dialog and comedic situations? How do you plan to work with your artist, Salva Espin, to make those comedic beats work in a comic?

PS: The big difference between comics and TV is that in comics you and the artist are doing all the work. In TV you have many collaborators from actor, directors, editors and even locations, all which change the original idea. Basically you have many chances to re-write and change the characters and story as you watch it play out through the process. In a way TV is never done until it's handed to the network, but here, you really have to commit to every decision much earlier so you have to really be positive before an artist starts his work on it. Because as you get further down the road, it becomes less and less possible to make changes. In a weird way it forces you to make bigger choices earlier and stick by them. Salva is no stranger to Deadpool, so he has great sense of mixing the tone and his style. We were just constantly impressed with his amazing art.

NG: Good writers are good calibrators in any medium. We are so lucky to work with Salva. He just takes whatever we give him and makes it better. 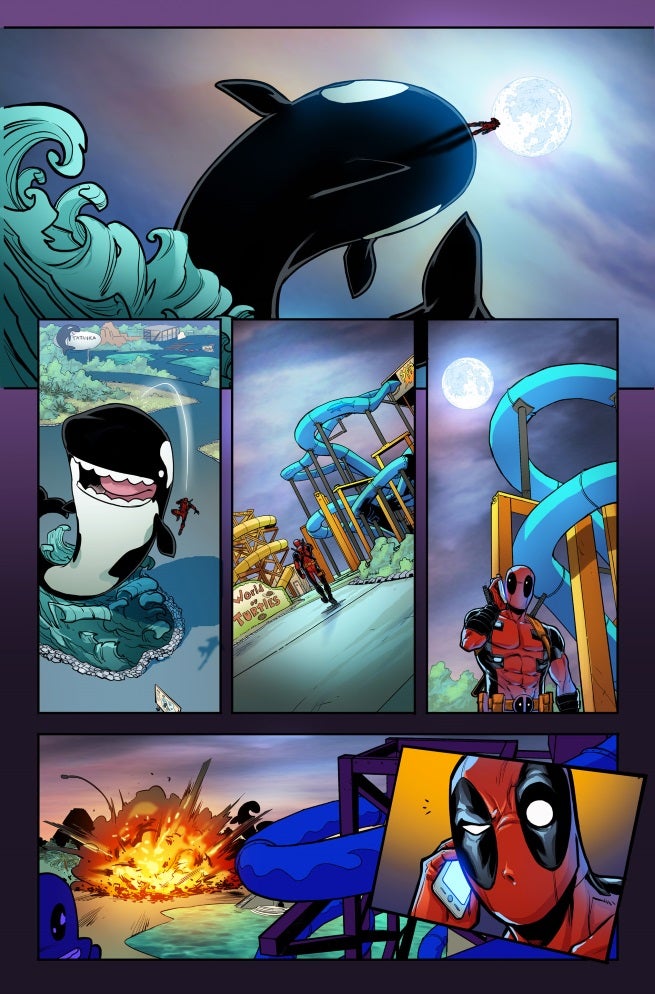 Paul, you have a background in improv. Does that effect your creative process when scripting for comics? Do you find yourself bouncing ideas back in forth, or running through panels of dialog, with NIck and evolving it as you go?

PS: Yeah, very much so. I've been doing improv so long, that I don't even really know writing without using that skill set. The best tool to take from improv for me is just doing a first pass that really is more off the cuff then you can refine it with each additional draft but at least you have a starting point. I treat writing a scene like I would when I improvise, but I'm just by myself. The amazing thing about my partnership with Nick is that once we crack the story we each take a pass at a scene, and we switch off who tackles the scene first, so each scene I hope is the best of both of us.

A Deadpool story usually guarantees you two things: comedy and violence. What can we expect the ratio between the two to be in this story? Was it hard to strike a balance?

PS: Those are 2 things we love! I definitely have a little bit of a history with that with Human Giant and NTSF:SD:SUV::, so it wasn't hard finding a balance, it was more difficult figuring out what type of weapon we'd use for each corresponding act of violence. I'd say our ratio is like 60/40 on the comedy side.

NG: Paul's better at math than me, go with what he says. 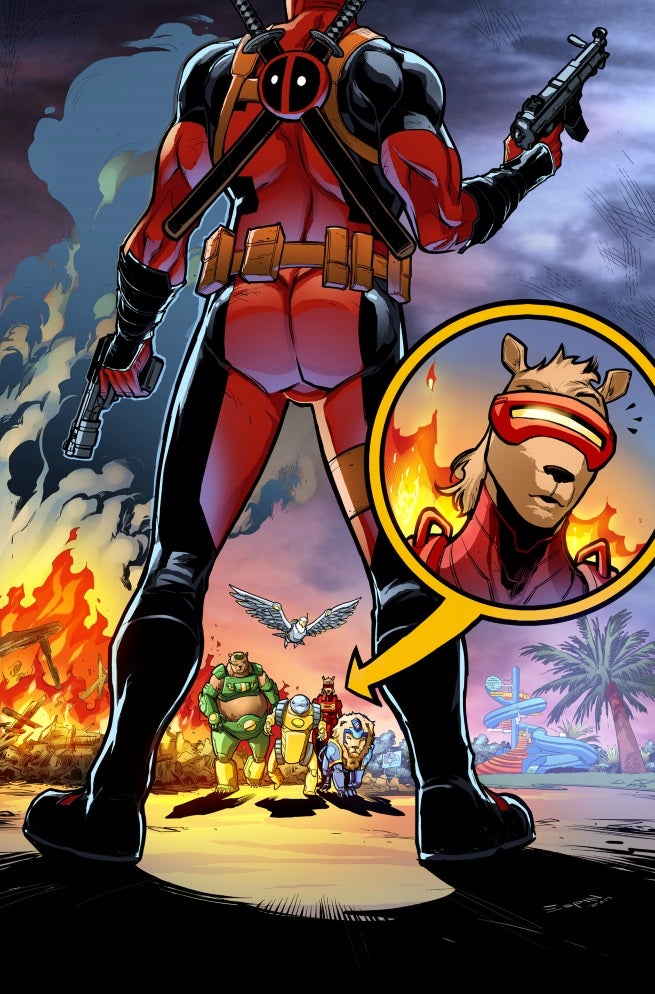 Obviously we don't want to spoil the story here, but can you tease what you're most looking forward to getting fan reaction to in the story?

PS: The ending battle is pretty fun and crazy. A few times, we were positive that Marvel was going to make us change stuff, but they didn't, so hopefully they won't get too many complaints! Plus, I really want to see how people react to this new version of Brute Force.

Do you think of this as your one, great Deadpool story, or do you find yourself wanting to return to the character in the future? Or maybe there are other Marvel Characters you'd like to work on? Can we expect to see you launching a Brute Force ongoing series?

PS: I'd pretty much be on board to do anything in the Marvel Universe. These annuals are particularly fun because you don't have to feed into the main story line of a series. You basically get a chance to take characters out for a test drive. But off the top of my head, I'd love to try something with Guardians, Bendis has done such an amazing job and I really love those characters and it shares a Deadpool ratio of humor and ass kicking. But in addition to that, maybe a Dr. Doom mini series or Bob, agent of Hydra. There is a plan that we talked to Axel about a while ago and hopefully if this sells, he might get on board with our idea.

Deadpool Bi-Annual #1 goes on sale September 17, and your last chance to pre-order is August 25 with Diamond order code JUL140685.