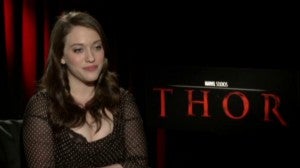 Kat Dennings, star of films like Thor and CBS' hit comedy 2 Broke Girls, told an interviewer earlier this week that she knows whether or not her character (Darcy Lewis) will return in Thor 2. She knows, but she can't say. As reported by MTV's Splash Page blog, Dennings told a Blip-GoldDerby web showthat "I do know the answer to that, [however] I do not have the clearance to talk... interpret that as you will. ... I've asked when I can say things, but apparently I can't yet, so that will come soon." It's probably a safe guess, at that stage, that in spite of most of the film being set in the Other Realms, Dennings and Natalie Portman will still play at least a small role; it seems odd for her to be under an NDA or even just a vow of silence if her character had been deemed inessential and written out of the film. She's also a young star on the rise and someone Marvel probably wants to keep tabs on, considering that her contract probably has her for pretty cheap compared to what she's asking now.